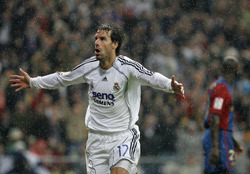 Ruud van Nistelrooy has announced he is no longer available for international selection.

The Real Madrid striker, who has not played for Holland since being dropped from the starting line-up at last summer’s World Cup finals, has now confirmed he will focus all his efforts on club football.

He has now decided to end his international career after scoring 27 goals in 53 games.

“(It is) disappointing, I always played for Oranje with much pleasure and I would have liked to continue to do that,” said Van Nistelrooy in a statement.

“I did not specifically ask for a place in the side, but I did want to have the feeling that I would be a candidate for that.

“I did not get that feeling. That is why I don’t see the conditions to give a good performance. No-one benefits from frustration. That’s why this was a difficult but correct decision.”

The announcement will come as a disappointment to Holland manager Marco Van Basten who recently held talks with the Real striker about a return to the international setup.

“We have had a good conversation on Friday in Madrid about the cooperation over the past year,” said Van Basten. “We ironed out some folds. And with that there was a base to eventually come together again.

“We have told Ruud when he asked us about this, that the situation about his position is no longer the same as a year ago. In 2006, we saw other candidates for the striking position.

“That is why he should be prepared to compete with the others. We cannot guarantee him a starting place. That would not be fair to the other candidates for the position.”