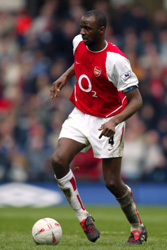 Arsenal captain Patrick Vieira reportedly wants to meet manager Arsene Wenger this week to discuss his future after he was linked with a move to Juventus.

The Italian champions have so far denied reports they have held talks with Arsenal about a move for the 29-year-old Frenchman.

But according to reports in Italy, vice-president Roberto Bettega will fly into London on Tuesday to meet with representatives of the London club.

Juve are thought to have bid £5m plus Stephen Appiah, but Arsenal value the Frenchman at £14m. Even this figure is less than half the £29m that Real Madrid were prepared to pay the Gunners for their skipper 12 months ago.

Juventus are also rumoured to be keen on a move for Arsenal winger Robert Pires, 31, who has expressed his frustration at the one-year deal being offered by the club.

Juve’s director general Luciano Moggi admitted he had been in London on business last week but refused to comment on which player they were interested in.

“There have never been any negotiations over Vieira. I went to London for other players, not Vieira,” he told L’Equipe.

“Yes, I met with Arsene Wenger, but that’s because he’s a friend of mine – not to discuss Vieira’s transfer.”