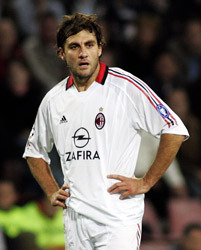 Veteran Italian striker Christian Vieri is set to return to action after a year on the sidelines by playing for Atalanta against Empoli in a league match on Wednesday.

The 33-year-old forward last played on March 26 of last year when he injured his left knee when representing Monaco against Paris St Germain in the French first division.

He has since undergone two operations to repair the damage and eventually signed on August 30 for Atalanta for the minimum salary.

Vieri played 49 times for the Italian national side, scoring 23 goals, but was overlooked for the squad that eventually won the World Cup in Germany last year.