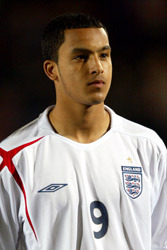 Arsenal winger Theo Walcott could be out of action for up to three months out after dislocating his shoulder in training with England on Tuesday evening.

The injury rules Walcott out of Wednesday evening’s friendly with Germany at Berlin’s Olympiastadion, a game which had already been hit by injuries to both teams.

“During tonight’s training session Theo Walcott dislocated his right shoulder after falling on the pitch,” said an FA statement.

“Arsenal’s medical staff were advised of the injury soon after the incident.”

The Arsenal player injured his left shoulder just three weeks ago during the defeat away to Stoke and had surgery in the summer of 2007 to address persistent shoulder injuries.

The injury is certain to anger Arsenal manager Arsene Wenger, who, along with Sir Alex Ferguson and Rafael Benitez, has been a constant critic of international friendly matches.

Immediately his side’s defeat by Aston Villa on Saturday, Wenger again outlined his opposition to this week’s matches.

”It is particularly not welcome at the moment because it is at a period where you want your players to recover a little bit,” he said. ”I don’t see what you gain from this friendly because there is no game. You can explain a friendly to prepare for an official match but after this there is no international game for four months.”

And, as he digests the news of Walcott’s injury while on international duty, Wenger will know Arsenal are the ones who will suffer most from Walcott’s unfortunate accident.

For England, without a number of senior players including Steven Gerrard, Frank Lampard, Wayne Rooney and Rio Ferdinand, Walcott’s absence further weakens what was already a makeshift side.

”Our priority is Theo and making him as comfortable as possible before he returns to England,” said coach Fabio Capello. ”We are all very disappointed but the important thing is for Theo to travel home and make a quick recovery.”