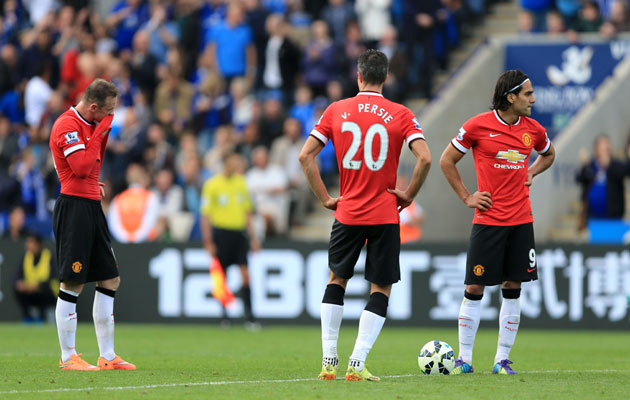 Louis van Gaal has admitted he is not “satisfied” with Wayne Rooney form as a striker, believing new loan signing, Radamel Falcao, represents a better option up front.

The Manchester United coach has suggested his captain may have to play in midfield.

Van Gaal’s side suffered a shock 5-3 defeat at Leicester City on Sunday having led 3-1 before the newly-promoted side scored four second half goals to hand United a chastening defeat on Sunday. It left the side in 12th place with only five points from five games.

Speaking before the match Van Gaal said: “We have played well but can improve and I was not so satisfied with Rooney as a striker and Mata as midfielder and that’s why I’m changing.

“Rooney can play in more positions, he’s a multi-functional player and I have tried him in a striker’s position. He’s played well but not spectacular and Falcao is a striker and I think he can do it better.”

Van Gaal again played a 4-3-1-2 formation that used Rooney in the hole behind the strikers and after stating on Friday that his captain has “privileges” regarding his selection, then the future of Juan Mata at Old Trafford now looks questionable.

Rooney is currently on 218 goals, making him the club’s third-highest goalscorer of all time, behind Dennis Law on 237 and Bobby Charlton on 249.

On having to change positions, Rooney said: “I’m happy to play out wide – I can do a job there and I can do a job up front. It depends on the situation of each game and what the manager wants me to do.”

The 28-year-old also believes he is now a different kind of footballer to the one who thrust himself on to the world stage as a 17-year-old.

“I’m not the player I was – I feel I’ve progressed my game,” he said. “So I agree with the people who say my game has changed. I [did] too much running when I was younger and then didn’t have the energy to get myself into goalscoring positions in the box.

“I’m a cleverer player now and know when to run into the box and when not to, and as a result more chances have come my way and I’ve scored a lot more goals for the club.”