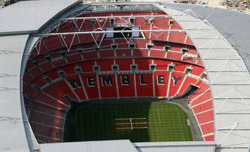 Chelsea haven’t lost to Bolton since 2003 and host the Trotters at Stamford Bridge on Tuesday – full betting here.

The Football Association says it will decide after the weekend whether to replace the much-criticised Wembley Stadium pitch for the 10th time since it was first laid in 2007.

The pitch cut up badly in the weekend’s FA Cup semi-finals and came in for criticism from all quarters.

“Football’s the top priority. We have to deliver and sustain a consistent quality pitch,” read an FA statement.

“I saw that they have relayed it 10 times. It looks like relaying the pitch is not the problem. They have to go deeper into the problem,” said Wenger.

“I don’t know if it would harm England’s campaign, I just want to feel comfortable that England have the most renowned football stadium in the world. To have a bad pitch is not acceptable.

“I’m confident that the confederation will sort it out but it cannot remain that everybody complains about the pitch after the game. It’s not good enough.”

In addition to showpiece football games, Wembley also stages rugby matches, NFL games and music concerts and has even hosted motorsport events in the past.

Professional Footballers’ Association chief executive Gordon Taylor said the heavy demands on the pitch meant it was essential the problem was solved as soon as possible.

“We have cup finals, Football League play-offs and within days an England international game,” said Taylor.

“There has not been enough forethought put into it. There is so much opportunity to take advice with regard to drainage of a pitch and letting air and sunshine getting through but it’s not happening.”

Chelsea haven’t lost to Bolton since 2003 and host the Trotters at Stamford Bridge on Tuesday – full betting here.