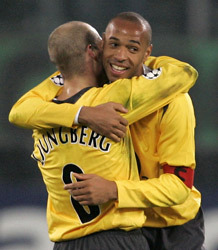 Arsenal manager Arsene Wenger was delighted after watching his team book a place in the Champions League semi-finals for the first time.

A 0-0 draw in Turin helped secure a 2-0 aggregate triumph against Juventus.

The Italian champions never looked like overcoming the first leg deficit as Arsenal held firm for a record-breaking eighth successive game without conceding a goal.

“I’m delighted for the club,” said Wenger. “In the past few years we have been considered favourites but never reached this point.

“This season nobody expected us to get to the semi-finals and we are there. We have defeated the likes of Real Madrid and Juventus and now we have a big appetite to win the Champions League.

“We controlled the game really well and as long as Juve didn’t score, everything was fine. They are not at the top of their game – we are. Our aim was always to protect our lead and we did.

“There were turning points – when they hadn’t scored after 15 minutes and then after half an hour but the big turning point came when (Pavel) Nedved was sent off – then the game was over.”

“We even had two good chances to kill the game but failed to convert, but although it’s always a bit frustrating when you don’t score, I’m delighted with the performance of my young defence as they have not conceded against Juve or Madrid.”

Wenger noted that Arsenal had finally reached the semi-finals of the competition at a time when they had virtually been written off.

“I am very happy for the club, every year we were expected to do something in the Champions League and we weren’t able to. This year no-one expected it from us and we are there in the semi-final,” he said.

“If Arsenal continue in this form, it’ll be difficult for anybody to beat them,” he said.

“At the end of the game all I could do was congratulate my players because they did really well against a team on top form.

“The simple equation is that they scored two goals, we didn’t score at all – they were better than us. It was a really difficult game. Both teams played aggressively and with the right attitude. Arsenal were dangerous on the break but in the second half we created changes but unfortunately couldn’t score. Now we must accept defeat.

“It was a difficult match played with determination and aggression by both teams. They were very careful but dangerous on the counter-attack.

“In the second half we caused them some problems but we couldn’t get the goal. We have to accept defeat and after the game I congratulated the team on their performance against exceptional opponents,” he said.