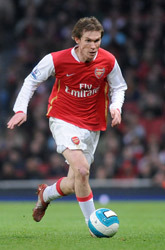 Arsenal boss Arsene Wenger insists that Alexander Hleb will not be leaving the club.

Hleb’s agent has been quoted claiming the 27-year-old has rejected the offer of a new contract and is considering joining Inter.

“Alexander is preparing to make the most important moves of his life,” Nikolai Shpilevski told the Belarus paper Pressball.

“He is leaving Arsenal even though they want to offer him a new long-term contract and better conditions. Only time will tell if leaving is the right decision, but there’s no way back now. Everything will be cleared up in the next two weeks.”

However, asked if there was any news on Hleb, Wenger told BBC Radio 5 Live: “No. We have not been in touch with any club about Alexander Hleb.”

Flamini’s decision to join Milan has given cause for concern among Arsenal fans that there could be an exodus of players this summer. But Wenger sought to calm fans’ nerves.

“We will have a competitive team next year to fight for the title, just like this year,” he said. “I believe we are still together and we’ll be stronger.”

The Arsenal boss also reiterated his desire to retain the club’s wage structure.

“I personally have fought all my life for players to earn good money because I think they deserve it,” he said.

“But I believe at every club you have to respect what you can spend and you shouldn’t promise what you cannot afford.

“We want every player to earn good money but you have to respect the wage structure of the club and the financial potential of the club.”