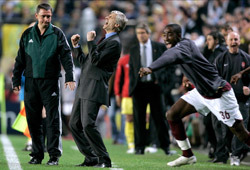 Arsenal held Villarreal to a goalless draw to go through 1-0 on aggregate.

Wenger said: “There was a big doubt about Arsenal in Europe for years, even when we were dominating in the championship.

“That is why I am very happy that finally we have got there when nobody expected us to and with a side who they said had no chance at the start.”

Wenger believes his team have a great chance in the final, which will be played in Paris on 17 May.

“We have knocked out Real Madrid, Juventus and Villarreal and we have every right to believe we can win the final,” he added.

“We will go into the final and I believe we will see a different Arsenal, we will have recovered physically and we have everything to win.

“It completes a work of nine-and-a-half years and a lot of effort,” said the Gunners boss of his time as boss of the club.

“It is a reward for my staff and people who work with me. I have had the support of the board no matter what decisions I made in all these years.

“The best way to reward them all is to go into the final and win it.”

Arsenal will meet the winners of the Barcelona- Milan tie discover. The teams meet tonight in Camp Nou with Barcelona holding a 1-0 advantage from the first leg.

“There will be big expectations and I hope it will be a fantastic football game but it is not certain Barcelona will go through, even if it is 70% that they will,” added the Frenchman.