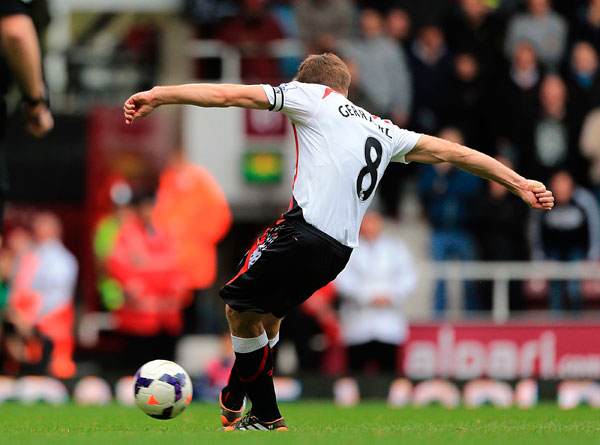 Steven Gerrard has listed the qualities he believes Liverpool possess that will help them win the Premier League title.

The Liverpool skipper cited Liverpool’s win at West Ham United on Sunday to illustrate why he thinks they have the traits required to win the league.

In-form Liverpool have now won nine consecutive league matches and Sunday’s win took them back to the top of the table – two points clear of Chelsea and four ahead of Manchester City, who have two games in hand.

Gerrard identified the second-half introduction of Lucas Leiva as confirmation the squad has “a bit of everything” needed to become champions.

“I think there was a lot of pressure on him – the Brazil coach was here to watch him. He hasn’t played much of late but he’s come back and worked his socks off to get fit.

“The ball he played for the second goal – people have been raving about (Philippe) Coutinho all year and the passes he has made – but for me, that was right up there with Brazil’s best.

“I think that helped us go on and get the win.

“So it’s great credit to Lucas and I think it shows that in this squad now we have a bit of everything – a bit of class, a bit of skill in Luis Suárez, Daniel Sturridge and Coutinho. But we’ve also got some steel. We have lads here who want to roll their sleeves up and dig in.”

All valuable assets, but pretty futile without the assistance of some generous match officials who appear desperate to be do their bit to ensure Liverpool finally end a 24-year league title drought. Anthony Taylor was the latest referee to play a crucial part part in Liverpool’s charmed procession to title number 19. Against West Ham, he awarded two highly dubious spot-kicks to take the Reds total to 10 in the last 13 matches.

As gamblers say: better to be lucky than good.