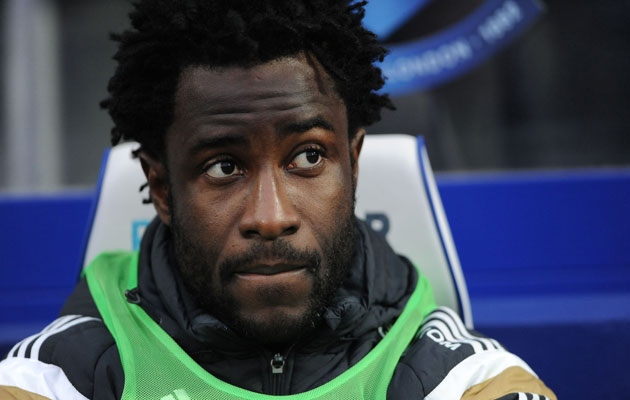 Wilfried Bony is on a pay-as-you-play deal with Manchester City as he will top up his weekly salary of £100,000 with an additional £20,000 every time he plays for the Premier League champions.

The 26-year-old striker signed for City in a £25 million deal on Wednesday, but he was unable to convince his new club that he was worth more than £100,000 a week. A compromise was struck which sees the Ivorian striker receive £20,000 for each appearance he makes.

Bony, who has signed a 4½-year contract, told the club website: “It’s a great feeling for me, it’s a big honour to be here and it’s a great challenge. As a player it’s always good to be part of one of the biggest clubs in the world and it’s a good opportunity for me to be in that situation now – I’m really proud.

“I felt excited to wait for this moment and now it’s come, it’s fantastic. I think it’s a great decision for me – Manchester City is in the Champions League. You remember at the end of last season I said that if I want to move it will be to a team in the competition because it’s a great tournament that I really want to play in and one that I want to win.

“It’s a motivation for me to give my maximum to be in that place. City is a big club with great players with a lot of experience; I believe we can do it.”

Manuel Pellegrini, the City manager, said: “He is very difficult to mark because he is so strong He is an intelligent footballer who has skill and power. His goals record has been excellent since he came to England. He adapted very quickly to the game here and I think he will settle in at City quickly.

“He will be a very good addition to our squad. We now have four top-class strikers and I am looking forward to seeing them work together.”

Bony is currently on international duty with the Ovory Coast,. He will meet up with new team-mates after the African Cup of Nations, which kicks off on Saturday.