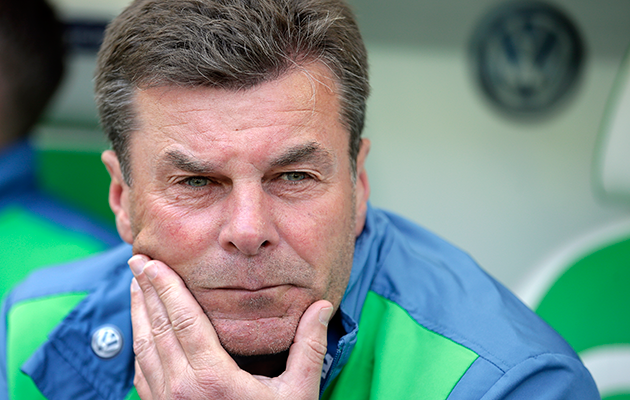 Wolfsburg earned just one win from their first seven matches and are in 14th place, two points above the relegation zone. Sunday’s 1-0 defeat at home to RB Leipzig appeared to have convinced Wolves general manager, Klaus Allofs that time for a change had come.

“We have to talk about this and see if there’s a reaction,” Allofs said. “It could with be the coach (Hecking). It could also, at some point, be without him. ”

No one on the Bundesliga circuit would have been particularly shocked on hearing that Wolfsburg had fired Hecking, their ‘Trainer’ for the best part of four years.

Not so long ago, the ex-policeman’s was the man with the golden touch at the VW Arena, leading the Wolves to Bundesliga silver and the DFB Cup in 2014-15, voted German Coach of the Year for 2015 and taking his team to the quarter-finals of last season’s Champions League. But how quickly it has all unravelled, with considerable
investment in new personnel resulting only in domestic stagnation.

Despite featuring such big-names as striker Mario Gomez, creative midfielder, Julian Draxler and Swiss left-back, Ricardo Rodriguez, the Lower Saxons have won just once in the top-flight this term and the home defeat at the weekend to newly-promoted RB Leipzig was the final straw.

“Following the disappointing results of late, we came to the conclusion that we needed to change the coach and give the team a new impulse, ” declared Wolfsburg general manager, Klaus Allofs.

“Despite great matches in the Champions League, we failed to qualify for an international competition last season,” Allofs said in a statement. “And the reshuffle of the squad has not produced the results we were hoping for.

The club’s Under 23 coach, Valerien Ismael, who once starred at centre-back for Bremen and Bayern Munich, is to take over on an interim basis.

Hecking said on the club website he was “disappointed” but accepted his side’s early-season form had not reached the required standards.

“I would have liked to continue working with the team and get them back to winning ways, but I respect the decision of the club,” Hecking said.