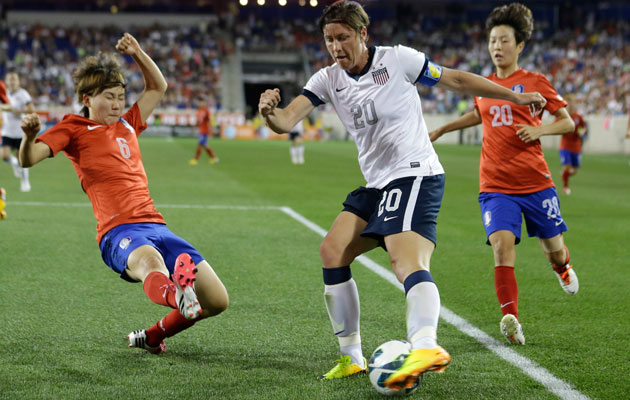 The row over the use of artificial turf at next year’s women’s World Cup in Canada has taken a twist with a group of leading players deciding to sue FIFA and the Canadian Soccer Association claiming gender discrimination.

Led by Abby Wambach, the US national team striker, the players have filed a lawsuit suit at the Ontario Human Rights Tribunal in Toronto.  Altogether 50 players from 12 countries back the action.

The women are unhappy with the decision to play the tournament on artificial surface when their male counterparts have always played the World Cup on natural surfaces. They also claim there is a greater risk of injury.

“The gifted athletes we represent are determined not to have the sport they love be belittled on their watch,” the players’ attorney Hampton Dellinger said in a statement. “Getting an equal playing field at the World Cup is a fight female players should not have to wage but one from which they do not shrink.”

A FIFA official told The Associated Press that there were no plans to reconsider the decision to use synthetic turf.

“There’s no Plan B,” Tatjana Haenni, FIFA’s head of women’s competitions, said on an inspection visit to Canada.

FIFA regulations state that all matches in a tournament must be played on the same surface. When Canada launched its bid, it specified that the final at Vancouver’s BC Place had a synthetic pitch.

“There’s so many different debates around this. But the reality is, the men would never play (the World Cup) on field turf,” Wambach told AP two weeks ago. “So for me, it’s a women’s rights issue, it’s an equality issue.”

After setting a deadline of September 26 for negotiations to begin, Dellinger said, the players had “no choice” but to go to court.

“Men’s World Cup tournament matches are played on natural grass while CSA and FIFA are relegating female players to artificial turf,” he said. “The difference matters: Plastic pitches alter how the game is played, pose unique safety risks and are considered inferior for international competition.”

Canada is hoping to use the Women’s World Cup as a dry run ahead of a bid to host the men’s equivalent in 2026 when in theory it should be CONCACAF’s turn to host.

In a statement the CSA said: “Our lawyers will be reviewing any and all applications or information related to this. We will refrain from any comment until there has been a thorough review.”