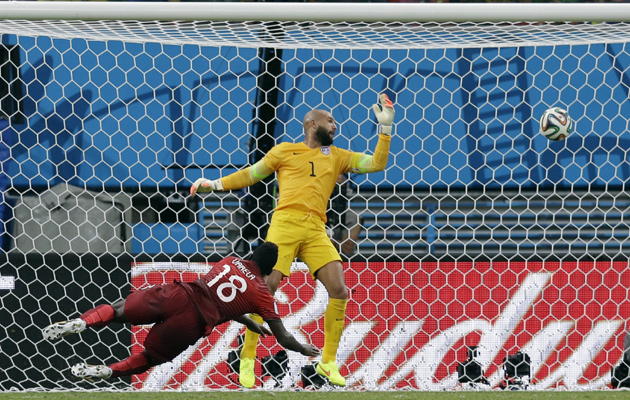 And seconds after Varela’s dramatic late equaliser for Portugal, the final whistle blows in Manaus.  USA looked to have made it into the last 16, with Portugal heading home. But now Group G is still open, with all four teams going into the last round of matches with hopes of reaching the second round.

With seconds remaining, Portugal have equalised! Varela headed home from a perfect cross from Cristiano Ronaldo.

USA captain Clint Dempsey is just onside as Zusi turns the ball back across goal and he stabs the ball home from close range. As it stands USA are heading into the last 16, Portugal are heading home.

A brilliant strike from midfielder Jermaine Jones brings USA level. Jones picked up the loose ball, motored forward and fired home from the edge of the area. Portugal keeper Beto was motionless as the ball flew past him.

Nani gave Portugal a dream start after five minutes but USA recovered, found their feet and had the better of the half, creating more chances and nullifying Cristiano Ronaldo’s influence. However, they will be grateful to keeper, who pulled off a brilliant just before the break to deny Portugal substitute Eder.

A dream start for Portugal. Nani pounces to put Portugal ahead after a mistake by Geoff Cameron. The USA defender sliced a clearance to the unmarked Nani, who delays his shot and then fires past Tim Howard.

Next up, it’s USA against Portugal in Manaus, the last of the second round of matches of the group stage.

Portugal coach Paulo Bento has made changes forced upon by the suspension of Pepe and the injury to Fabio Coentrao. But he has resisted calls to play William Carvalho in midfield, sticking with Miguel Veloso.

USA as expected, with Graham Zusi brought into midfield and one striker, captain Clint Dempsey, in the absence of the injured Altidore.

It’s all over in Porto Alegre. Algeria have beaten South Korea 4-2 and put themselves in strong contention for the last 16. It was the first time an African side have scored four goals in a World Cup match. After a breathtaking display of powerful, incisive football in the first half, Algeria let South Korea back into the game after the break, when the Koreans scored twice. But the North Africans held on for a famous victory.

Algeria have given themselves a great chance of reaching the second round. South Korea now need to beat Belgium, while hoping that Russia beat Algeria, to have any hope of reaching the last 16.

Another goal for Korea. Substitute Kim Shin-wook headed back across goal and Korea’s captain Koo Ja-cheol scrambled the ball over the line. Algeria haven’t wrapped up the points just yet.

Just as Korea looked like they could play their way back into the match, Brahimi scores from Algeria’s first attack of the half, playing a lovely one-two to shoot past Jung.

Algeria have become the first African to score four goals in a World Cup match.

South Korea look like staging a bit of a comeback here, with Son taking advantage of a mistake by Bougherra to shoot home.

Wow,  a stunning first-half performance from Algeria. They’ve blown South Korea away with some powerful attacking play and are now on course for the last 16.

Algeria have scored again! The Korean defence failed to deal with another long ball from the back, Slimani laid if off for Djabou to place the ball past Jung for Algeria’s third.

Two goals in two minutes have put Algeria in the driving seat in Porto Alegre. Centre-back Halliche has just risen to head home from a corner, with Korean keeper Jung stranded. Two minutes earlier, Slimani put Algeria ahead when he held off two Korean defenders to be first to a long ball played over his shoulder from deep.

Four years ago, Algeria failed to score in any of their three games. Brazil 2014 is proving very different.

Algeria, who have made a number of changes from the side that were beaten at the death by Belgium, have made the running early on. They had a good claim for a penalty when Feghouli was brought down, and were unlucky to see their appeals turned down.

The second game of the day is about to get underway. Here are the teams.

Belgium 1-0 Russia – full time
It’s all over in the Maracana. Belgium have snatched a late winner but neither side deserved to win such a poor game. After a largely soporific second half, Belgium came to life in the final 10 minutes. Mirallas, on for Mertens, hit a post from an 84th-minute free-kick but that, remarkably, was Belgium’s first shot on target. Then Hazard found his way to the byline, before pulling the ball back for another substitute, Origi, to fire home.

Belgium 1 Russia 0
Origi 88
They hardly deserve it, but Belgium have the lead, Origi shooting past Akinfeev after a run and cut-back from Hazard. It was only Belgium’s second shot target in the entire game.

Lukaku has gone off, replaced by Origi, but the first thing the young striker does is fall over in the box, claims for penalty waved away.

We’re back in action at the Maracana. No half-time subs.

Belgium have been the better side in a poor first half. Mertens has more than justified his place in the starting line-up, giving the Russia left-back Kombarov a torrid time. But his final decision-making has been poor: he crossed when he should have shot, and then shot when he should have crossed to Lukaku. Mertens and De Bruyne have both been lively, but Hazard has been strangely subdued.

Kokorin had Russia’s best chance, rising unmarked between Belgium’s centre-backs but headed wide. A shocking miss, but then Russia are a poor side. Then again, they were decidedly average in the first half against South Korea, before Capello rang the changes.

Belgium have been the livelier side in the early exchanges. Axel Witsel is mopping up in midfield and a brilliant run from De Bruyne set up Martens, but his cross for Lukaku was cut out.

Keep an eye on the ref

The referee in charge of Belgium-Russia is German Felix Brych, who is considered by many to be the leading European official at the tournament and a contender to take charge of the Final – assuming Germany, or another European side, do not make it that far.

Belgium-Russia – team news
Belgium have made a number of changes to the team that came from behind to beat Algeria in their opening game. Vermaelen comes in for the dropped Vertonghen, while Fellaini and Martens start in place of Chadli and Dembele, with De Bruyne moving to a central role.
Russia coach Fabio Capello has resisted the calls to starts with Dzagoev and Denisov, who made such a difference when they appeared as substitutes against South Korea. Kanunnikov starts instead of Zhirkov on the left side of attack.
Belgium: Courtois; Alderweireld, Van Buyten, Kompany, Vermaelen; Witsel, Fellaini; Mertens, De Bruyne, Hazard, Lukaku
Russia: Akinfeev; Kozlov, Berezutskiy, Ignashevich, Kombarov; Glushakov, Fayzulin; Shatov, Samedov, Kanunnikov; Kokorin

Another day, another three World Cup games. First up it’s Belgium v Russia in Rio de Janeiro. Then it’s down to Porto Alegre for South Korea v Algeria. Finally, it’s up to Manaus for USA v Portugal. Follow all the action through the day here.