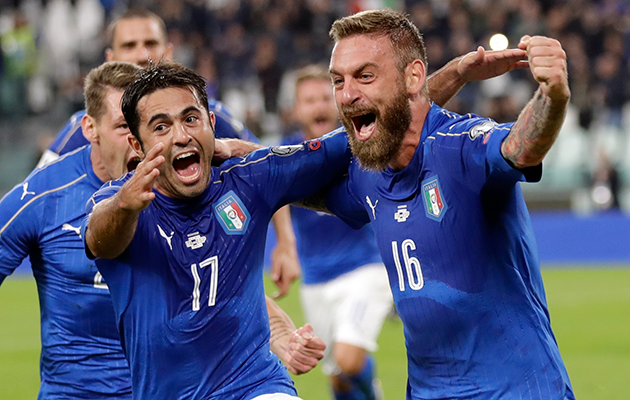 Daniele De Rossi scored a late penalty to earn a 1-1 home draw against Spain in their World Cup qualifier, after veteran goalkeeper, Gianluigi Buffon, had gifted the visitors a deserved lead with an uncharacteristic error.

Spain dominated the possession in the first half but had to wait until ten minutes after the interval before breaking the deadlock. Buffon rushed out of his penalty area as Vitolo broke clear but completely mistimes his challenge, allowing the forward to go round him and roll the ball into an empty net.

Italy, who had been thoroughly outplayed in the Group G match, managed to pick up what might prove to be a valuable point in the 82nd minute when Éder was fouled by Sergio Ramos and De Rossi scored the spot-kick.

“We knew Spain would keep possession, but it’s equally true the goal was a fluke and Buffon didn’t have to make a real save,” said Italy coach Giampiero Ventura.

It was a result that both sides would have been happier with beforehand, but on the balance of play, Spain coach Julen Lopetegui was understandably disappointed that his side, though dominant in most areas, were unable to finish off what looked a limited Italy team.

“We played a good game in all senses,” Lopetegui said. “An excellent first half, and a it was a pity we could not take the three points. This is Italy, who always have another life. We were unable to kill the game.

The result left both teams with four points from two games behind Albania, who have six points after their 2-0 away win over Liechtenstein, courtesy of a Peter Jehle own goal and a Bekim Balaj goal. 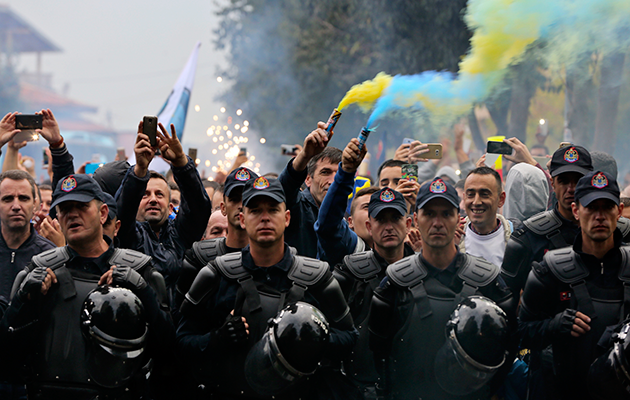 Kosovo fans are escorted by police ahead of the match against Croatia.

Kosovo’s home introduction to competitive international football was obviously a memorable occasion, though the 6-0 defeat to Croatia was not a match their supporters will look back upon with much fondness.

Mario Mandzukic scored a hat-trick as Croatia thumped the Fifa new boys Kosovo 6-0 in Shkodra, Albania in Group I.

It was the first “home” qualifier for Kosovo since they were admitted as a member of world football’s ruling body, Fifa, and European equivalent, Uefa, in May.

Croatia, who have four points from two games, lead Iceland, who have the same number of points, at the top of the table. The surprise package of Euro 2016 struck twice in a thrilling last six-minute spell to secure a 3-2 home victory over Finland.

The Finns haven’t won a match in over a year but must have thought that run was coming to an end when they took a 2-1 lead and Gylfi Sigurdsson missed a penalty. Iceland had to wait until the 91st minute for Alfred Finnbogason to score the equaliser, before defender Ragnar bundled the winner over the line in the 96th minute.

Ukraine are third on two points after Turkey fought their way back from two goals down against them to earn a 2-2 home draw with a late penalty from Hakan Calhanoglu.

Andriy Yarmolenko put the visitors ahead on 24 minutes from the penalty spot Artem Kravets and two minutes later Kravets doubled their lead when he was played in by Yarmolenko after beating the offside trap.

Ozan Tufan pulled a goal back for the hosts before Calhanoglu equalised from the penalty spot.

In what looks like it will be a fiercely contested Group D, Serbia won 3-0 in Moldova with goals from Filip Kostic, Branislav Ivanovic and Dusan Tadic.

It was Slavoljub Muslin’s first competitive win as Serbia coach, with his team having been held to a 2-2 home draw by Ireland on his debut.

“The result will have restored the confidence that was lost after previous failures but there is no reason whatsoever to get carried away,” said the coach.

Wales drew 2-2 with Austria, although they will feel disappointed not to have returned from Vienna with all three points after taking the lead on two occasions. The pick of the goals was Joe Allen’s 20-yard strike which put Chris Coleman’s side ahead midway through the first half. Two goals from Marko Arnautović salvaged a point for the home side.

In Dublin,the Republic of Ireland secured a 1-0 win over Georgia courtesy of Seamus Coleman’s first half goal.

Coleman, 27, made a run down the right, cut into the box and slotted home after the ball ricocheted into his path thanks to two rebounds.

The result was overshadowed by what looked a serious head injury to Robbie Brady, who was forced to retire hurt after receiving treatment following a clash of heads with Georgia defender Solomon Kverkvelia.