Roy Hodgson has told fellow travellers on a London Tube train that Rio Ferdinand’s England career had reached “the end of the road”.

Travelling to work the England coach told commuters that he would not include the Manchester United defender in his squad for World Cup qualifiers against San Marino next Friday and Poland four days later.

“I very much doubt it. He hasn’t played for England for quite a while,” Hodgson said when asked about Ferdinand.

“I have to say it is over for him and England. It has got to be the end of the road. He is pushing 34 and hasn’t played for England for a long, long time.”

Fair enough, although one would assume that the decent thing to have done would have been to tell the player first before revealing all to the man on the Clapham Omnibus, so to speak.

Hodgson has now apologised for his faux pas.

“What I remember saying is talking to quite a lot of people on the tube, and one guy said, ‘Is Rio in the next squad?’, and I think I might have said ‘I don’t think so’. But I think that’s about as far as I went.

“But I shouldn’t say that of course. That’s a mistake and I need to apologise for that.

“But this is one of the hazards I suppose of travelling on tube trains which is the best way for me to come into London – and then speaking to people on the tube train who ask me questions rather than sitting there tight-lipped refusing to ever open my mouth.”

Put the spade down Roy. 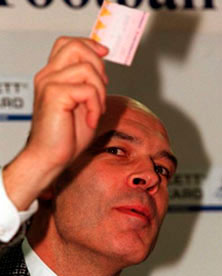 Hopefully, Hodgson will not suffer the same fate nor ridicule as Christian Gross, the last high profile football manager to travel to work via the tube. On his appointment as manager of Tottenham in 1997, Gross proudly brandished his tube ticket after travelling to his first press conference on the London Underground.

“Hopefully it’ll be the ticket of my dreams,” he said. “I came on public transport because I wanted to experience how the fans feel.”

For the next months or so the fans felt increasingly despondent, and and within a year Gross was on his way – this time via taxi.

The Superclássico das Américas match between Brazil and Argentina was abandoned last night after a floodlight failure in Resistencia.

Both teams were on the pitch at the Centanario Stadium preparing to kick off, when a generator powering the floodlights failed just before the match.

The incident is a major embarrassment to the Argentinian FA, who admitted after the match that no new dates were available for the game to be replayed as the international calendar was packed until the end of the year.

The floodlight failure is the second in a high profile match in successive weeks, following the abandonment of Rayo Vallecano’s La Liga game against Real Madrid.

A stunning overhead kick from Karim Benzema was the pick of the goal’s in Real Madrid’s 4-1 win over Ajax.

“I think the paradise of football is actually the German Bundesliga. We have the most competitive and the most attractive league in Europe. It’s the league with the tightest competition and with the best stadiums. The fans are great. Of course, England may be close to this. But that I am still dreaming about managing in England, this issue is over. That was something I was after when I started being a manager in the game.”

Borussia Dortmund coach Juergen Klopp, who has been linked with both Arsenal and Liverpool, says he has no desire to leave Germany.

A good Hart is hard to find…

And who could blame him…Klopp will have felt validated watching his side outplay Premier League champions Manchester City on Wednesday night.

Although the thrilling Champions League encounter finished in a 1-1 draw, the general consensus was that City were fortunate to secure a point and were it not for the heroics of goalkeeper Joe Hart, would have suffered a painful defeat on home soil.

“Joe Hart is incredible because he saved everything and we should say thank you to him,” Mancini said. “He did a fantastic performance. I don’t know if it’s the best performance in football history but he did very well.”

Wayne Rooney who was watching the match on television suggested Hart’s performances demonstrated why he was the best goalkeeper in the world.

“Have to say Joe Hart has been incredible. For me best keeper in the world,” Rooney tweeted.

What with Hart being the best goalkeeper in the world, Ashely Cole the best left-back, Steven Gerrard the best midfielder and Rooney one of the best forwards, is it any wonder that England have dominated international scene in recent years…

Save of the day

On a good night for goalkeepers, Milan were grateful to Christian Abbiati, who pulled off a series of stunning saves during his side’s 3-2 Champions League victory over Zenit St Petersburg.

“It was important to get a result here and that’s what we did,” the 35-year-old said.

“My second half saves were important for how the match finished. My most difficult save was the one from Hulk’s free kick. He hit the ball very hard and my arm still hurts from the shot.”

Here’s the shot in question:

Seattle Sounders are set to create a piece of MLS history this Sunday when they face arch-rivals Portland Timbers.

The club has sold more than 66,000 tickets for the match agains, thus guaranteeing them their largest league crowd ever.

They already are assured of breaking the club record for an MLS match: the 64,140 who turned out last season for goalkeeper Kasey Keller’s farewell match against the San Jose Earthquakes.

The largest attendance for an MLS game was the 69,255 who turned out to watch the Los Angeles Galaxy and the New York Metro Stars (now the Red Bulls) at the Rose Bowl in 1996. 92,650 did attend the Chivas USA–New England match at the Los Angeles Memorial Coliseum in 2006. But that game was part of a doubleheader that included Barcelona-CD Guadalajara.

The Sounders are something of a phenomenon when it comes to attendances. Their average this season of 42,134 per home game is more than double the league average (18,521) and nearly 20,000 per game more than runner-up Montreal, who averages 22,945.

Indeed, one has to go outside Europe and into the traditional big leagues of Europe to get some kind of perspective on Seattle’s love affair with football.

The club would rank fourth in both Italy’s Serie A and Spain’s La Liga.

FIFA President Sepp Blatter has expressed his disappointment that an Italian footballer made a FIFA ambassador for reporting match-fixing has not been able to find a job since.

Simone Farina was playing for Gubbio when he refused a €200,000 offer to fix an Italian Cup match against Cesena in November last year and reported it to police.

FIFA honoured him  and Cesare Prandelli invited him to train with the national team for three days as a reward for his honesty, but he has been unable to find another club after being released at the end of last season.

“This is something absolutely incredible, it is something that could only happen in a game and…it should not,” said Blatter .

“We have to protect the players who disclose match-fixing,” he said.

“We have had some feedback where players disclosing some activities…have not been accepted again as players.

“We have to protect the players and the players also have to be protected in their clubs, their leagues, their federation.

“We at FIFA cannot make an umbrella over all the players, it is not possible.”

Perhaps it is just a coincidence and one certainly hopes so, but the failure of Farina to find another club, does bear uncanny similarities to cases that have occurred in cycling. In particular, the ostracisation from the sport of Cristophe Bassons, who questioned the barely-believable Tour de France performances of Lance Armstrong and others.

From fixing football matches we move on to footballers fixing horse races.

Three footballers have been charged with serious rule breaches after an investigation into suspicious betting activity by the British Horseracing Authority (BHA).

The charges allege that Chopra backed three horses to lose, or asked others to do so on his behalf, using information provided by Heffernan. The horses were Wanchai Whisperer (January 28 2011 at Lingfield); Gallantry (February 2 2011 at Kempton) and Silver Guest (February 9 2011, also at Lingfield).

Chopra’s gambling issues have been well documented. Thankfully, today’s charges pre-date his admission that he had a serious problem.

In 2011 he was admitted for treatment at the Sporting Chance clinic and commuted from the addiction treatment centre to training and matches.

His club Ipswich have at times paid his wages directly to those he owes significant amounts. When he signed for the club in June 2011 Ipswich paid him £250,000 to help settle his debts.

Speaking in November 2011, Chopra talked about his addiction.

“Your first bet’s your worst bet. As the years have come along and I’ve earned more money I’ve started to gamble more. I was gambling up to £20,000 a day at times. As soon as I’d step over the white line I would focus on football – but as soon as I got to the dressing room I would check my phone to see if I’d won.

“As a gambler you want to be playing to get the appearance money. I was playing through injury to cover a debt.

“In my first season at Cardiff I had a gambling debt from when I was at Newcastle. I had to leave Cardiff and sign for another team to pay that debt off. I have probably lost between £1.5m and £2m on gambling.”

The good news continues to roll in…

Prodan angered Universitatea fans when she announced plans to play home games in Buzau, some 400 kilometres from Cluj, after a disagreement with local authorities.

“I can’t stand the situation at Universitatea anymore,” said Prodan. “There are people who could kill me.”

For those of you interested in reading more on the background to this story, you could try this very useful English language blog.