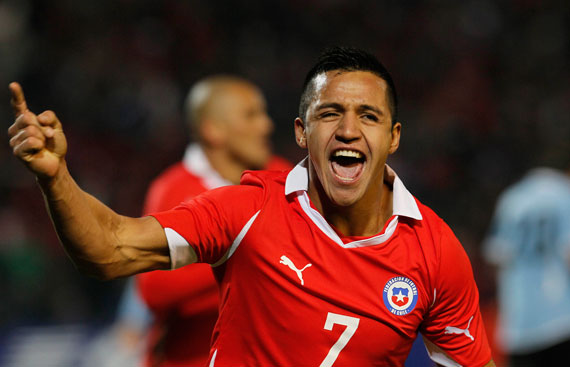 Alexis Sanchez has finally completed his move from Udinese to Barcelona. The Chilean forward moves to the European champions for a fee of £23m, which could rise as high as £33m.

Sanchez, and not Arsenal’s Cesc Fabregas, has always been Pep Guardiola’s main transfer target this summer, and the coach expressed his delight at finally getting his man.

“Sanchez is very young,” Guardiola said of the 22-year-old Serie A player of the year.

“He can play in all three attacking positions, he shows intense defensive skills, he’s direct and from what I’ve been told, he’s a very nice kid.”

I predict a riot

A pitch invasion from hundreds of Fenerbahce fans caused the abandonment of Thursday’s friendly match against Shakhtar Donetsk.

The supporters, many of whom were wearing masks bearing the face of imprisoned Fener boss, Aziz Yildirim, were angry at what they perceived to be the scapegoating of the club and its chairman, in the country’s ongoing match fixing scandal.

An initial incursion by two supporters was followed by a mass pitch invasion by scores of angry Fenerbahce followers.

Here’s footage of what turned out to be a relatively ruly pitch invasion.

If your partner ignores your phone calls and is then spotted consorting with a rival paramour, you’d have good reason to doubt their commitment to the relationship. Such is the predicament faced by Manchester City boss, Roberto Mancini, who appears to have become persona non grata with Carlos Tevez.

The Italian admitted he had not been able to contact Tevez, and that was before pictures emerged of the Argentinian speaking to the Inter sporting director Marco Branca in Sardinia. Of all the beaches in all the world…

Naturally, Tevez claimed the meeting was a chance encounter, and if he hadn’t spent all summer trying to engineer a move away from Manchester, I’d be more inclined to believe him.

Has he never heard of Roaming? Failing that, how about texting?

Twenty four hours after Spain’s Under-19 European Championship game against Belgium was abandoned due to adverse weather conditions, the teams returned to replay the match.

The delay did little to help underdogs Belgium who were swept aside by yet another generation of impressive Spanish footballers. The final score was 4-1 to Spain and here’s the pick of their goals from Juan Muniz.

Non goal of the day

Just 24 hours after FIFA confirmed that they were testing nine different goal-line systems, along came an example of why such technology might be quite useful.

During Chelsea’s friendly match against a Malaysian XI,  a Didier Drogba free-kick rebounded off the post before the keeper collected the ball on the line. However, the match officials were convinced the ball had crossed the line and wrongly awarded the goal. Although given the angle the linesman faced and the unusual trajectory of the ball, it’s easy to see why the mistake was made.

Brazilian Sports Minister Orlando Silva has moved to reassure FIFA that the country’s preparations for the 2014 FIFA World Cup was on course.

Silva was responding to a suggestion made last month by FIFA general secretary, Jérôme Valcke, that the building work was lagging behind schedule.

“There is a lot of work to deliver.” Valcke said. “We don’t have stadia, we don’t have airports, we don’t have a national transportation system in place and we are one month away from the preliminary draw. In Sao Paulo they will not even be able to play the Confederations Cup in 2013 because the stadium will not be ready.”

Silva claimed that FIFA will be pleasantly surprised when they see the progress that has been made.

I’m not sure about ‘surprise’, but they’ll be quite shocked when they see the state of the Maracana, venue for the 2014 final. 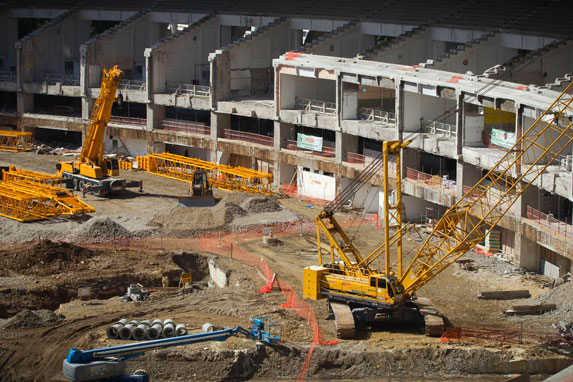 The Maracana stadium in June 2011

According to reports coming out of Argentina, national coach, Sergio Batista, will be relieved of his duties on Monday. Batista has come under pressure to resign following Argentina’s quarter-final Copa America defeat to Uruguay.

The news of his departure will be welcomed by former coach, Diego Maradona, who on Wednesday took great delight in informing the media that he would have resigned if he were Batista following the Copa debacle.

The frontrunners to succeed Batista are current Paraguay coach, Gerardo Martino, and Alejandro Sabella, who led Esudiantes to the Libertadores Cup success in 2009, but more recently has been in charge at UAE outfit Al-Jazira.

Given his country’s parlous economic situation, it’s a wonder that Greek Prime Minister George Papandreou has time to focus on something as trivial as football, but, on Tuesday, he will meet UEFA president Michel Platini to discuss the ongoing probe into match-fixing.

A total of 68 people, including club owners, players, referees and other officials have been named by an Athens prosecutor. The investigation was launched after a list of 41 suspicious matches was submitted to the country’s football federation by UEFA.

Those implicated in the scandal have been charged with a wide array of offences including fraud, extortion, money laundering, illegal gambling and illegal possession of firearms.

While Brazil sets about rebuilding its infrastructure to host the 2014 World Cup finals, many countries have already begun the arduous task of trying qualifying for them.

In Asia, the process is well underway, and this weekend sees the second round first leg games take place.

Several of the continent’s traditional heavyweights are already in action, among them regular qualifiers such as Saudi Arabia and Iraq.

At stake for the winners is a place in the first group stages against Australia, Bahrain, Japan, Korea DPR and Korea Republic.

Ever wondered who the most popular player in England is right now? Well, an entirely unscientific study published in the Premier League Season Review 2010-11, would indicate that the current number one is Wayne Rooney. The Manchester United striker’s surname was the most popular for the back of Premier League replica shirts sold last season.

Those dropping out of the top ten include wantaway pair, Carlos Tevez and Cesc Fabregas, which does seem to prove that all of the people won’t be fooled all of the time.