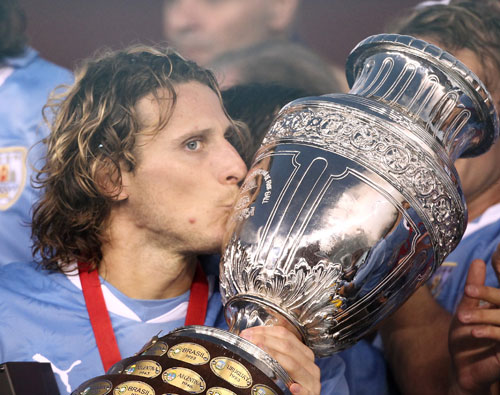 Forlan emulated his father and grandfather in winning the Copa America

Congratulations to Uruguay who became champions of South America on Sunday. The 3-0 win over Paraguay, courtesy of goals from Diego Forlan (2) and Luis Suarez, ensured that Oscar Tabarez’s side lifted the Copa America trophy for a record 15th time. For a population of 3.5 million that’s some going, and when you throw in their two World Cup successes, it’s fair to say that no country punches above its weight quite like Uruguay.

For Forlan in particular, the match was a personal triumph. He equalled Hector Scarone as Uruguay’s all-time top scorer with 31 goals, and remarkably, the Atletico Madrid striker has now emulated both his father and grandfather in winning the tournament.

Mario Balotelli added to his canon of unforgettable moments when he attempted to showboat after being put through on goal in Manchester City’s friendly game against LA Galaxy.

Here’s the incident that prompted City coach, Roberto Mancini, to substitute his striker.

Afterwards, Mancini reminded the Italian striker of his responsibilities to the game.

“I hope this is a lesson for him,” Mancini said. “In football you always need to be professional, always serious and in this moment he wasn’t professional. If you are serious, you can play 90 minutes. If not, you can come and sit by me on the bench.”

Balotelli enjoys a reputation as one of the sport’s brooding bad boys, but a quick look at the following footage reveals him to be more buffoon than enfant terrible.

The general consensus in Spain is that Cesc Fabregas will soon be on his way to Barcelona.

Marca said on Monday that Barca coach Pep Guardiola “is taking the signing (of Fabregas) for granted.”

Sport claimed on Saturday that Fabregas was “fed up” of playing for a club that has won nothing since 2005.”

Meanwhile, Catalan radio station RAC-1 said that “the deal will probably be done this week.”

Marca also said that Barca have raised their offer to Arsenal from €30 million to €36 million, and are also trying to include several young Barca players in part exchange. Elsewhere, it’s reported that Arsenal manager Arsene Wenger is keen on including Thiago Alcântara as part of the deal. He certainly fits the Wenger mould: he’s young, he’s not English, he’s flourished at youth level, and at some point in the future he’ll want to join Barcelona.

One player who won’t be going to Spain this summer is 19-year-old Santos forward, Neymar. Well, at least that’s the hope of the Brazilian club’s president, Luis Alvaro de Oliveira.

There was a time when a European club simply had to click their fingers and the best of South American would come running, but the times, they may be a-changing. The Brazilian has been strongly linked with a move to Real Madrid, but with Santos having no financial compulsion to sell, the Spanish side may have to bide their time.

“He will stay at Santos. It is not safe, but that is my intention, my objective,” de Oliveira told AS. “I have talked a lot with his father, and now we will resume those conversations. It does not make sense he leaves now.   I have spoken with Real Madrid’s president [Florentino Perez] a few times, I told him that Neymar is indispensable to us and for at least the next six months.”

Ricardo Teixeira, the president of the Brazilian Football Confederation (CBF), has launched a withering verbal attack on the Football Association (FA).

“The islanders (Britain) are the pirates of the world,” Teixeira told Revista Paui. “It’s all rubbish…these English people are annoyed because they lost (the 2018 World Cup tender to Russia). “ (Lord) Triesman had to explain in court how he spent US$50 million, $15 million of which was Government funds, on England’s bid. It’s a ridiculous sum…we spent only $1 million and we won.

Texiera believes the BBC is behind a campaign to get the the 2014 World Cup finals taken away from Brazil.

“The BBC is a state organisation,” he continued. “It is of interest to the British Government to annul Russia’s selection (for the 2018 World Cup) and to pull Brazil from its place because they think they can substitute us at the last minute. It’s all orchestrated.”

Teixeira was accused by a BBC Panorama programme last year of taking bribes in the 1990s regarding the awarding of contracts for the sale of television rights to the World Cup. Surprisingly, given the seriousness of the allegations, neither Texeira nor FIFA have ever responded to the allegations of corruption.

Manchester City striker Carlos Tevez has slammed Sir Alex Ferguson’s claim that he was not offered a new contract at Manchester United because he intended to retire within four years.

Ferguson said: “He told us at the time of negotiations that he was only going to play for four more years, so if we had signed him on a five-year contract knowing that he was going to quit in four years’ time, there is no re-sale value for us.”

A scandalous assertion. Everyone knows that Tevez won’t retire until his agent tells him to.

There were no major shocks in the weekend’s Asian World Cup qualifiers, although India may have felt that they achieved a moral victory by only losing 3-0 to UAE after playing 70 minutes of the game with just nine players.

The red cards incensed the Indian players, and coach Armando Colaco revealed that he had to persuade his players from walking off the pitch in protest.

“To walk away is something I don’t think my federation will have allowed me to do,” he said. “They [India’s players] said they didn’t want to continue but I thought about the sanction from FIFA and AFC.”

Looking at the key incidents, it’s no wonder that Colaco felt compelled to say: “the referee killed the game today.”

Mohamed Bin Hamam, the former head of the Asian Football Confederation, who was banned from football for life on Saturday, has maintained his innocence and pledged to clear his name.

The Qatari, who was found guilty of bribery by FIFA’ ethics committee, wants the evidence that led to his life ban to be placed in the public domain.

“If you wish to hear the evidence presented for and against at the hearing in an impartial way, then my lawyers have already said and requested that the transcript should be made available to the media by FIFA so that you can judge the evidence and testimony for yourself,” he said.

Bin Hammam, who challenged Sepp Blatter for the FIFA presidency, has accused his rival of behaving like a dictator.

He told Sky News: “You have witnessed, through history, the dictators when they think that a person is prominent to replace him, the first thing they do is execute him. They try to fabricate any allegation against him, to jail him or something like that.

“I don’t know if Mr. Blatter considers himself a leader or not but the leader doesn’t revenge.”

Argentina coach Sergio Batista insists he will remain in his position, despite coming under pressure to quit following his side’s dismal Copa America campaign.

“These days have been for silence and reflection, and thinking about the right and wrong choices we made. As well as seeing the reactions from different sectors,” the coach told Clarin. “I have a lot of confidence and the will to continue.”

Nonetheless, the informed speculation in Argentina indicates that the country’s Football Association do not share that confidence.

Swiss side Neuchatel Xamax have fired their entire coaching staff after only two games of the new season.

Coach Francois Ciccolini, team manager Sonny Anderson and the rest of the staff, appointed in June, were dismissed after a 2-0 defeat at champions FC Basel left them pointless and goalless after two games.

The news, though susprising, is not entirely unexpected, considering that since the club was taken over by Chechen businessman Bulat Chagaev in May, Neuchatel have already fired two coaches, ditched all their sponsors and sacked their administrative staff. Even the playing staff are not immune from the turmoil, with goalkeeper Rodrigo Galatto fired on Friday after only one week and one game at the club.

Chagaev is also the financier of Russian Premier Division outfit Terek Grozny, the Chechen side that hired Ruud Gullit as their coach earlier this year. The Dutchman, lasted six months, which in Chagaev’s world, must qualify him for a lifetime achievement award.