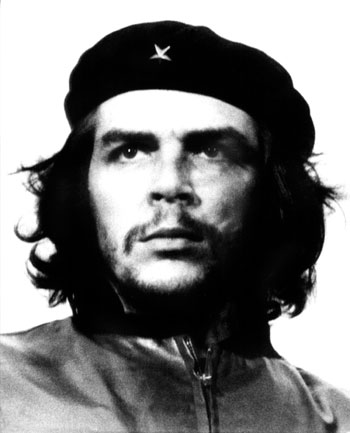 New Manchester City signing, Sergio Aguero, believes he is at the vanguard of a football revolution.

Aguero, known as ‘Kun’, and soon to be called something similar by Manchester United fans, is married to Diego Maradona’s daughter and be believes he can follow in the footsteps of his father-in-law. Though, one hopes, not in every regard.

“No one will ever be exactly like Maradona again but I really think that every so often there is a total revolution in football and someone needs to be the revolutionary who starts things off. That’s me!

“If I achieve what I want to then I’ll mark a distinct era in football. I’m the Che Guevara of modern soccer.”

“I like tricks, I like to dazzle, I like to be able to score a goal with one leg bent round the other so that you smack the ball into the net with your wrong foot. Dribbling and leaving your opponent on his backside is what life is for.

I’m not sure what Guevara would have made of Aguero’s definition of revolutionary were he still alive, but it’s reasonable to assume that he’s currently spinning in his grave.

While Aguero settles into his new home, it looks as if a fellow South American striker will be staying put. Neymar, coveted by Real Madrid and many others, looks set to stay to remain in Brazil.

Nunes has now told Marca: “We can’t understand how a club can spend €30 million on a defender like Coentrao and won’t pay €45 million for a forward who will provide goals and entertainment.

“[Real Madrid] think money is everything in life, but that is not always the case. There are other values in life.”

Fine, noble sentiments, though as Nunes has already conceded, if the money was right, those values would go out of the window quicker than you could say ‘how many Brazilian real can you get for 45 million euros’.

Neymar did his reputation no harm at all last night, with this wonderful solo goal in Santos’ dramatic 4-5 defeat to Flamengo – of which more later.

Napoli president Aurelio De Laurentis believes that the Italian football authorities are conspiring against his club. This being Italy, it’s a reasonable accusation.

The film producer stormed out of a ceremony to mark the release of the 2011-12 Serie A fixture list. Despite requesting an easy start to the season, in recognition of their Champions League commitments next season, Napoli face Milan in the third round,  just four days after their CL debut. They also face Inter in round 6, just three days after another CL group match.

“It’s all been mapped out against us,” he blasted. “Enough is enough, I’m going back to cinema. This makes me ashamed to be Italian. I want to change citizenship!”

Bizarrely, as he stormed out, he asked a boy passing by to give him a lift on his scooter, and off they rode together, like Gregory Peck and Audrey Hepburn in Roman Holiday.

Like buses, you wait all year for a nine-goal thriller and two come along at once. The French Super Cup looked to be heading Lille’s way with the reigning champions leading 3-1 with just five minutes to play. However, a flurry of late goals saw the match end, somewhat improbably, in a 5-4 victory to Marseille.

All the action, including the dive that led to the winning penalty, can be seen here:

Meanwhile, in Brazil, another epic was unfolding, after Santos raced into a three-goal lead against Flamengo. Step forward Ronaldinho who fired in a hat-trick to lead the visitors to an unlikely 5-4 win over the South American champions.

Highlights of the match can be seen here:

FIFA president, Sepp Blatter, who has come in for so much criticism in recent weeks that he must be seriously tempted to cash in on his unpopularity by selling dartboards imprinted with his face, has defended his flagging reputation.

In Rio, to attend the draw for the 2014 World Cup, Blatter was responding to claims made by his former presidential rival, Mohamed Bin Hammam, that he was a dictator.

“Let us work. I am not alone. I am not a dictator, as has been said,” said the man who stood unopposed for the FIFA presidency, while his erstwhile rival suffered a lifetime ban from the game.

He then pledged “zero-tolerance” (a real Blatter buzzword, that) towards corruption, but despite being in the FIFA hotseat for 13 years, said he still needed time to figure out how this could be done.

“There is a lot of work already on the table,” he said. “Give us the time to go step by step.”

Further proof that Blatter has a lot on his plate at the moment comes with the warning that Russia could be the next country to be afflicted by the dreaded match-fixing.

Sergei Stepashin, the head of the Russia’s audit office, has written to Prime Minister, Vladimir Putin, to say the country has to follow the lead of Turkey in drawing up tough anti-match fixing laws.

“Recently, a number of countries have seen an increase in the problem of match-fixing,” Stepashin wrote in a letter to Putin published by the Sovetsky Sport daily.

“Unfortunately, this is also a problem characteristic of Russian football,” he added, though without giving any specific examples.

He added that the consequence of fixed matches was a “reduction in public interest in football and the loss of top players to foreign clubs.”

Benfica took a large step toward qualification for the Champions League with a 2-0 away win at Trabzonspor. Nicolás Gaitán gave the Portuguese side a two-goal cushion to defend in next week’s second leg with a lovely curling shot.

Greek football authorities have relegated clubs Kavala and Volos and banned their chairmen for life for their part in the country’s match-fixing scandal.

In the decision announced early Thursday, the clubs were relegated to the second division and each fined €302,900, or several billion new drachma if and when the country eventually defaults from the Euro.

Both clubs have argued the decision and vowed to fight to remain in the 16-team Superleague. They argued, with some legitimacy, that the club officials accused of match-fixing have not yet gone to trial.

Everyone’s favourite expectorating footbaler, El-Hadji Diouf, has been banned from all football-related activities in Senegal by the Senegalese Football Federation.

It’s been a bad few days for Diouf. Last week his club, Blackburn, fined him for failing to report on time for pre-season training, and he was left out for their tour to Hong Kong. Rovers’ manager Steve Kean admits that the time might have come for the player to leave the club.

The Senegal ban comes because Diouf failed to attend a disciplinary hearing last week, which was convened to quiz the Blackburn striker about claims he had made on Radio France International, that “the whole system of African football is corrupt”.

Diouf who suffers from the rare condition pitch rage, and whose mood swings on a good day range from angry to livid, was veering towards apoplexy when he heard the outcome. He claimed that he knew nothing about the hearing and, in measured terms sure to endear him to any prospective employers, he subsequently told French magazine Stade he would “go to war” with the FSF if they took further action.

Having spent all summer denying that Wesley Sneijder was for sale, Inter appear to be panicking now that their bluff has been called by potential suitors Manchester United.

“Are Manchester United still after Sneijder? We haven’t seen or heard from anyone; that’s a story I’ve heard from you,” said a desperate Inter chief executive Ernesto Paolillo. “Is Wesley definitely not for sale? I don’t think there’s anything that can’t be sold, it all depends on the price.

Were United to continue to ignore Inter’s pleas that they buy Sneijder, perhaps the player could take a leaf out of Max Lonsdale’s book.

Lonsdale, 18, was released by League Two Macclesfield Town earlier this summer. However, the enterprising youngster knocked on the door of Sir Alex Ferguson and dropped off his cv and dvd of him in action. Ferguson told Lonsdale that he would get someone at Manchester United to look at the DVD and he would be in touch. Now, he’s starting matches for United’s reserves.

Here’s the video, which first came to our attention via 101greatgoals.com