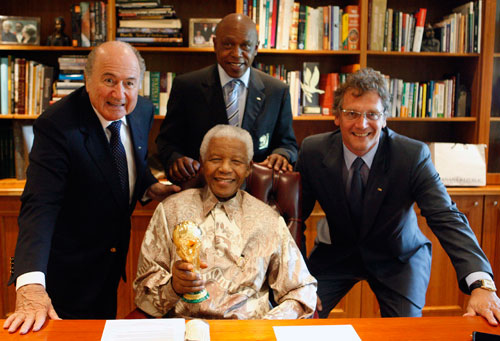 "Some of my best friends are ..." Blatter with Tokyo Sexwale, Neslon Mandela and Jerome Valcke

No escaping the FIFA president, Sepp Blatter, today as his ill-advised remarks about racism continue to dominate the headlines.

Blatter finds himself in hot water after appearing to brush aside the issue of racism on the pitch.

Asked in an interview by CNN whether he felt there is still racism on the pitch, Blatter said: “I would deny it. There is no racism. The one affected by this should say this is a game and shake hands.”

Here’s footage of the moment he may come to regret:

Blatter’s remarks were seized upon, most notably inEngland, where bashing Blatter is the country’s second most popular pastime after pontificating about wearing a poppy.

Among those who waded into the debate were Manchester United defender Rio Ferdinand, who wrote on Twitter that Blatter’s views were “so condescending its almost laughable.”

Blatter was quick to respond to Ferdinand stating that “the ‘black man’ as you call him has a name: Tokyo Sexwale.”

The Swiss added: “My comments have been misunderstood. What I wanted to express is that, as football players, during a match, you have ‘battles’ with your opponents, and sometimes things are done which are wrong.

“But, normally, at the end of the match, you apologise to your opponent if you had a confrontation during the match, you shake hands, and when the game is over, it is over.”

The timing of Blatter’s comments could have been better, coming as they did on the day that the FA have charged Liverpool striker, Luis Suarez, following remarks he made to Manchester United defender, Patrice Evra, in the October 15 clash at Anfield.

The statement said: “The FA has charged Liverpool’s Luis Suarez following an incident that occurred during the Liverpool versus Manchester United fixture at Anfield on 15 October 2011.

“It is alleged that Suarez used abusive and/or insulting words and/or behaviour towards Manchester United’s Patrice Evra contrary to FA rules.

“It is further alleged that this included a reference to the ethnic origin and/or colour and/or race of Patrice Evra. The FA will issue no further comment at this time.”

Liverpool confirmed last night that they would continue to back Suarez.

A Liverpool statement said: “The Club this afternoon received notification from the Football Association of their decision to charge Luis Suarez and will take time to properly review the documentation which has been sent to us.

“We will discuss the matter fully with him when he returns from international duty, but he will plead not guilty to the charge and we expect him to request a personal hearing.”

If only Evra had possessed the foresight to say it was just a game and then shaken Suarez’s hands.

Corinthians took advantage of Vasco dropping points against Palmeiras by defeating Ceara 1-0 to leapfrog their rivals at the top of the table. This solo effort from Peruvian Luis Ramirez separated the sides.

Game of the day

The match of the day was undoubtedly a nine-goal thriller which saw Fluminense come from behind to secure a 5-4 win over Gremio.

Fernando Torres has admitted he feels “in debt to the Chelsea fans” following the support they have given him since he arrived at Stamford Bridge in January.

Torres, who has scored just three times in 22 Premier League appearances since his move from Liverpool, is eager to repay the fans.

He said in the Daily Mirror: “Whenever you go somewhere new, you expect to have difficulties. But whenever I have had difficult times, I look at myself and say, ‘Yes, I can get back to my level.’

“If you do that and things do not work out, you have nothing to be ashamed of. But I am in debt to the Chelsea fans. They have always supported me. And I promise them the one thing I have never done and will never do in my life is give up.”

If he really wanted to repay the fans, there is one easy way to do it. He could actually pay them back the money he’s cost. A quick back-of-the-cigarette-packet calculation tells me that the Spaniard has cost Chelsea £57.350 million since he joined. That figure comes from a £50million transfer fee as well as 42 weeks salary at £175,000 a week. If he were to divide £57.350 million between the 40,000 Chelsea fans who turn up each home game to watch him meander about the pitch to little effect, then each of them would be entitled to a refund of £1433.75. That small gesture really would ensure their continuing support.

This town ain’t big enough for the both of us

Ajax have hired former coach Louis van Gaal as director Wednesday, much to the annoyance of club legend Johan Cruyff – himself a board member.

Having calmed down Cruyff detected a conspiracy at work.

“I don’t know what to say”, he told Voetbal International.  ”For a start, I knew nothing, nothing really.

“It’s logical that all sorts of things happen behind a search. To begin with, until Tuesday afternoon I was still in Amsterdam and only then I went back to Barcelona.

“Then it is very coincidental that the next day a meeting of the board happens. Well, you know…Please note I have only today at 11:00, received an email in Barcelona saying there would be a meeting. Obviously I could not be there.”

Earlier this month, Van Gaal told Voetbal International he and Cruyff could not work together at Ajax and ruled out becoming director. Given Cruyff’s inital reaction to the appointment, it’s hard to see how two such gargantuan egos can work together in unison. But, it promises to be entertaining watching them try.

The draw for next month’s Club World Cup has been made.

Barcelona will take on the winners between Esperance and Al-Sadd in the semi-finals in Yokohama on December 15, according to a draw on Thursday.

South American champions Santos, the other semi-final seeds, will face the winners between CONCACAF champions Monterrey and the side who survive the only first-round match, in Toyota on December 14.

The agent of Dimitar Berbatiov has confirmed that his client may be interested in a move to Russian outfit Anzhi Makhachkala.

The Manchester United striker is being tipped for a move to the Dagestan-based club in January and Berbatov’s agent admits he would be keen to hear what they have to say.

“We would be interested when Anzhi make a concrete offer,” Emil  Danchev is quoted as saying by the Daily Mirror.

“We will sit down with Dimitar and ponder this.

“I don’t know if Dimitar is happy in Manchester. He plays, then he just sits on the bench.”

Rubbing salt in the wound

The Russian Football Union has handed out bans and fines to club Terek Grozny and a player from an opposing team who was beaten by security officers during a match in Chechnya two weeks ago.

Spartak Gogniev, a striker for FC Krasnodar, had shoved a referee after being sent off during the November 4 match. He then had his ribs and nose broken by security officers.

Terek were fined 500,000 rubles and ordered to play its next two home matches at neutral stadiums in other towns.

The coach of the Terek reserve team and an assistant also were fined 500,000 rubles and banned for a year.

Terek is supported by Chechnya’s Kremlin-backed leader, Ramzan Kadyrov, whose security forces have been accused of torture and extrajudicial killings. In which case, it sounds like Gogniev got off lightly.

As if he didn’t have enough on his plate, Sepp Blatter will today receive a letter from the International Trade Union Confederation, Building and Wood Workers International (BWI) and the Swiss Union Unia, warning of an international campaign to stop the 2022 World Cup in Qatar, unless the football governing body imposes conditions on the Qatar hosts to uphold workers’ rights.

“FIFA has the power to make labour rights a requirement of the Qatari authorities who are hosting a world cup,” said Sharan Burrow, General Secretary ITUC.

“FIFA has already bowed to international pressure to introduce labour rights guarantees for all footballs bearing its logo. The people who build the World Cup football stadiums should be given the same protections.” said Vasco Pedrina, Unia and Vice President Europe BWI.