The “whistleblower” behind a series of corruption allegations involving FIFA executive committee members and Qatar’s 2022 World Cup bid has admitted that she fabricated the claims.

Phaedra Al Majid, a former international media officer for Qatar 2022, has confessed that she concocted stories because she wanted to exact revenge after losing her campaign job.

“I was very upset after I left the bid and wanted to basically hurt the bid back,” she said.

“My intentions were to make a few headlines, I never expected that my lies would be carried on and discussed in parliament.”The decision to make this admission is entirely my own,” she said in a statement published on a website specifically created for her retraction. “I have not been subject to any form of pressure or been offered any financial inducement.”

As Al Majid also says she “tampered” with a Qatar 2022 bid strategy document which she then leaked to journalists, she’s not exactly the most credible of witnesses.

Nonetheless the latest revelation will ease the pressure on Qatar and cause huge embarrassment for the UK parliamentary select committee, which last week published a report – based largely on Al Majid’s evidence – condemning FIFA’s response to the corruption allegations.

John Whittingdale, the select committee’s chairman, told the Guardian: “I can understand why Qatar would be upset about it, but our intention was to stress that these were serious allegations which FIFA was not investigating. If it turns out it was all a fabrication, which is a good outcome for Qatar, that has come out because we published.”

In other words, guilty until proven innocent. 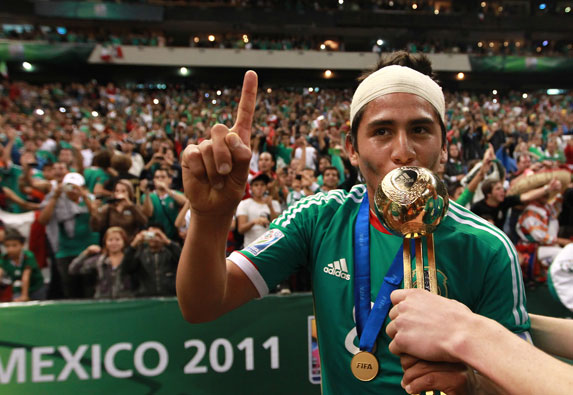 It’s been a great few weeks for Mexican football. Last month the senior side retained the Gold Cup, while over the weekend their juniors triumphed in the U-17 World Cup. It was Mexico’s second success in this competition, and there can be few doubts that they deserved it.

They won all seven of their matches in the tournament and swept the best player awards. Júlio Gómez of Pachuca won the Golden Ball, Jorge Espericueta of Tigres won the Silver Ball, and Carlos Fierro of Guadalajara won the Bronze.

Gomez, in particular, had a tournament to remember. After scoring twice in the semi-finals, and playing on with a bloody head injury in the semi-final win over Germany, he started the final on the bench. The fans, all 98,943 of them, many wearing bandages on their head in his honour, chanted Gomez’s name all night long until he made an appearance in the second half.

A busy weekend for David Beckham. His wife, gives birth to their fourth child, he welcomes Prince William to Los Angeles, scores direct from a corner and is named in the MLS All-Star team to face former club Manchester United.

He still has time to talk to the Spanish press about another of his former clubs, Real Madrid, and their manager Jose Mourinho.

“They have one of the best coaches in the world. Mourinho is a genius and he has proved that with all the teams he has coached,” the former England captain told Marca.

Beckham was signed for Madrid by Florentino Perez in 2003, but the president stepped down two years later before taking over again in 2009, when the Englishman had already left.

“If Florentino had stayed, I am sure I would have retired at Real Madrid,” Beckham said.

Instead he chose to do that in Los Angeles.

There is mounting speculation that Manchester United are set to sign Inter forward Wesley Sneijder. Now that the News of the World has closed down, we can perhaps start to take transfer gossip seriously again. Moreover, World Soccer’s Italy correspondent, Paddy Agnew, seems to think there’s something to the current rumours.

Sneijder reportedly favours a move to Old Trafford rather than taking up an alternative offer from Spanish club Malaga, who are now funded by Sheik Al Thani, of the Qatari royal family. A transfer fee of £35 million has been touted, although when the wages are factored in this figure will more than double.

Not wanting to be outdone and certainly not wishing to be outspent, Manchester City are reported to be spending £40million on Atletico Madrid striker Sergio Aguero.

Last week World Soccer Daily brought you news of the huge debts incurred by many of Spain’s top-flight clubs and wondered how feasible it would be to alleviate the problem. Well, credit to Barcelona for coming up with an enterprising new way of raising funds. They have moved into the wedding business.

Former Barcelona hockey player Iban Anglada and his new wife Sigrid Sans, an economist, became the first couple to have a wedding at Camp Nou and it reportedly cost them €60,000. The newlyweds and their guests had pitchside drinks, while the dinner and after-party were held inside.

The club has adapted its logo to reflect the new business venture.

‘Barcelona: more than a club… we also do weddings Bar Mitzvahs and children parties.‘

Not necessarily the best, but certainly the most timely and most rapturously celebrated goal of the day. Abby Wambach’s last minute equaliser for the USA v Brazil took the game to penalties. USA,who had played for nearly an hour with only 10 women, proceeded to win the shootout 5-3.

South Korea’s K-League is introducing lie-detector tests in a bid to combat corruption in the sport. The country has been plagued by a match-fixing scandal that has seen 46 players charged.

All players suspected of wrongdoing will now have to take a polygraph.

A more useful weapon in the fight to stamp out corruption might be the simultaneous announcement that the K-League will double the annual minimum wage for players. The minimum wage is currently around £6,900 – less than half the national average income.

Police have arrested the president of Trabzonspor and the former head of Turkey’s football federation on Monday as part of their match-fixing investigation.

Sadri Sener, whose club were runners-up last season, was detained, only days after the Aziz Yildirim, the president of the champions Fenerbahce, was also arrested.

Fenerbahce won the league championship last season, but reports suggest the club could be stripped of the title or even relegated to the second division.

This goal, scored in the final game of the season against Sivasspor – a game that Fenerbahce needed to win to secure the league title –  has attracted the greatest scrutiny.

Brazil have come under fire following the 2-2 draw with Paraguay. The holders and favourites needed a goal in the last minute to salvage a draw in their Copa América Group B tie in Córdoba. The performance comes on the back of an underwhelming goalless draw with Venezuela in their opening game.

The press, it has to be said, are not happy with what they have seen so far.

“Deception and crisis” was the verdict of national daily O Globo.

“The dreadful performance of the Brazilian side once again disappointed following their 2-2 draw with Paraguay.”

“Fred saves Brazil’s disgrace,” said Lance, who dismissed the display as “disorganised” and demanded: “Do better!”

After the pragmatic Dunga years, coach Mano Menezes was supposed to restore to Brazil the flair for which they had been renowned.

However, O Estado de Sao Paulo said the performance was so poor “they made supporters fall asleep in front of the television set”.

A reminder, that in Brazil, winning without style is not enough. Not winning at all, well that’s unforgivable.

Scottish Premier League outfit Hearts have belatedly developed a conscience or – depending on your levels of cynicism – bowed to public outcry, and sacked defender Craig Thomson. Last week, the 20-year-old was put on the sex offenders’ register for five years and fined £4000 after admitting indecent behaviour for offences involving girls aged 12 and 14.

Hearts boss Jim Jefferies told the Scottish Sun: “It has made it impossible for him to continue in this country.

“All the signs are he wants to stay in football, but it will have to be done elsewhere.”

“The boy has paid for being very silly, but he’s brought this on himself.”

Hearts had been warned about the player’s conduct by a concerned parent, but still allowed him to teach children PE at local schools and represent the club at an event with children’s charity Barnado’s.