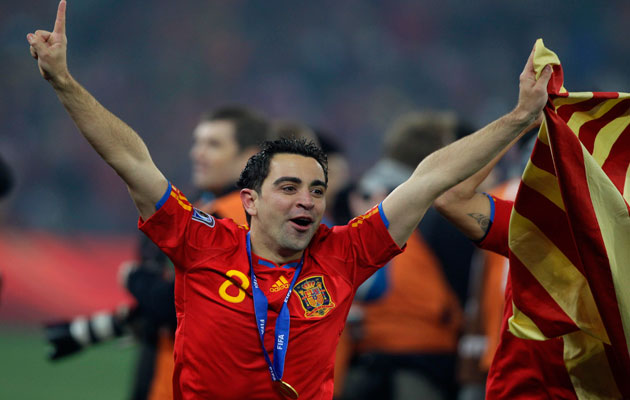 The 34-year-old Xavi won the World Cup and two European Championships with his country.

He was capped 133 times, more than any other Spanish outfield player, and scored 13 goals.

“I have decided to retire from international football,” Xavi told a press conference on Tuesday.

“I’m grateful for all those years. It has been a fantastic time.”

“From now on I’m another fan of the Spain team. I’m grateful to everybody at the Federation (RFEF), it’s been a marvellous time for me to be there for so many years and have so much success. I’m leaving very proud and I wish them all the best.”

Xavi made his international debut in 2000, the same year he won an Olympic silver medal with Spain.

He was named player of the tournament at Euro 2008 after leading Spain to their first piece of international silverware since the 1964 European Championships.

Xavi was also a key member of the 2010 World Cup winning squad that won Spain’s first ever World Cup.

Two yeas later, Spain retained their European crown, with Xavi again an intergral member of the side, providing two assists in the final as Spain defeated Italy 4-0.

The 2014 World Cup appeared to be a tournament too far for Xavi and the team that had dominated international football for the preceding six years. Spain, as the defending champions crashed out at the group stage. Nevertheless, he will be remembered as the man who made Spain tick, and the player who more than any other, embodied the tiki-taka style.

Here’s a compilation taken from Euro 2012 which showcases his wonderful range of passing.