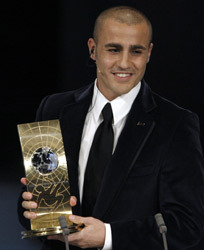 Win tickets to the biggest Sporting Events in 2007. Just answering 10 sports trivia questions to be in with a chance.

Zinedine Zidane believes Fabio Cannavaro is a deserved winner of the Fifa World Player of the Year award.

Zidane, who retired from football after last summer’s World Cup finals, finished runner-up to Cannavaro in the poll.

But Zidane, who also lost out to Cannavaro in the World Cup final, was not surprised by the outcome.

“The decision was difficult, but with his potential and his success this season, Cannavaro deserves the title,” he said. “But all the players who were present (at the ceremony) deserve to be there.”

“I am just happy being here, surrounded by all these great players, and seeing my friends’ faces again. That’s the important thing,” Zidane said.

“I quit playing six months ago and I am happy to see some players that I knew and who I haven’t seen for a while.”

“There are always players who deserve the award. It is difficult to pick just three of them,” Zidane added.

“Everyone has their own opinion. If you just look at potential, which he has, Henry deserves to be there but it is the same thing for everyone.”

Win tickets to the biggest Sporting Events in 2007. Just answering 10 sports trivia questions to be in with a chance.