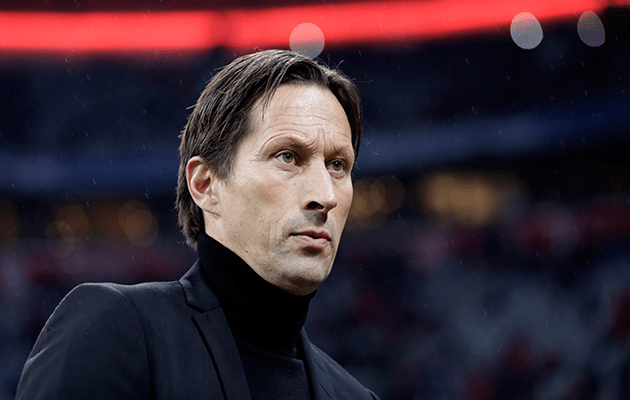 Strange how many coaches have been fired or had their grip on power loosened by first-leg defeat in the Champions League Round of 16. Claudio Ranieri biting the dust at Leicester; Luis Enrique announcing his forthcoming departure from Barcelona; the future of Arsenal institution, Arsene Wenger in real doubt. And now Leverkusen axing Roger Schmidt.

In the best part of three seasons at the ‘Werkself‘ helm, the volatile Schmidt achieved a great deal: thrice taking the Rhinelanders into the group stage of the Champions League, blooding and nurturing some excellent young players and at times producing some of the most intense and exhilarating attacking football ever seen in the Bundesliga.

However all good things eventually come to an end and this season, his side have stagnated across the board. Collectively, physically, mentally, technically.

Currently only tenth in the table – with defeats outnumbering wins – the Leverkusener have not slumped as low in 14 years and since the end of the winter break, have gone from bad to worse, only picking up six points from as many games, losing the last three, including a humiliating 6-2 loss in Dortmund on Saturday.

Schmidt no longer had any answers and on the evidence of his post-match press conference at the weekend, was taking refuge in delusion, insisting his team had played well and describing it as “a step in the right direction. ”

Club director of sport, Rudi Völler, stood by his man as long as he could. But like the rest of the board, finally had to admit that desperate times demanded desperate measures. The hour for change had struck.

The Achilles heel of Roger Schmidt was his death or glory tactical approach. Setting up his team to press high and in great numbers, he and his charges effectively were performing a high wire act. Sometimes it worked spectacularly. On other occasions, they were left totally exposed.

With his Leverkusen there was never a middle way. Either they swept all before them. Or committed hari-kari.

To replace Schmidt, the Leverkusen power-brokers have appointed the former Turkish international, Tayfun Korkut, as a caretaker until the end of the season. His mission? Steady the ship, improve the results and make up the five-point deficit which separates the BayArena boys from a Europa League qualifying berth.

The all-important question is whether Tayfun is up the task. Most would say not. He hardly set the Bundesliga alight while in charge of Hannover (2013-15) and this term delivered next to nothing in an unhappy four-month stint at second division Kaiserslautern.

What We Learned This Week
1. Grosskreutz grief
A World Cup winner with the Nationalmannschaft in 2014 – even though he never got off the bench – and a key figure in Jürgen Klopp’s all-conquering Dortmund side, Kevin Grosskreutz, is threatening to quit the game after his employers at second tier leaders, Stuttgart, took exception to his involvement in a late-night city centre fight and terminated his contract.

“I don’t want anything to do with football at the moment,” declared the tearful 28-year-old at a press conference.

A right-sided midfielder or full-back of considerable energy and drive, he can be something of a wild child off the pitch and when the dust settles, may opt to move abroad.

2. Frankfurt in free-fall
Beaten 2-1 at home by Freiburg at the weekend, Eintracht Frankfurt have now lost four in a row in the Bundesliga, thus dealing a serious blow to their hopes of European qualification. Just three weeks ago, they were sitting pretty in third, even ahead of Dortmund in the standings.

But in recent weeks all has turned dust for coach Niko Kovac and his not-so merry men, their progress undermined by injuries to key players (particularly midfielder Marco Fabian and centre-back Jesus Vallejo), a distinct lack of firepower and far too many suspensions.

Only lowly Darmstadt and Wolfsburg have picked up fewer points than Eintracht in 2017 (6). That says it all.