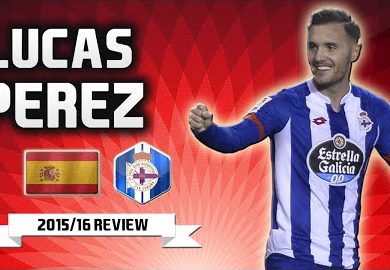 Arsenal have confirmed the signing of striker Lucas Perez from Deportivo La Coruña for an undisclosed figure, although most news outlets are reporting the fee to be around £17m.

Perez arrives against a backdrop of close-season discontent among Arsenal fans, many of whom have criticised manager Arsene Wenger for his reluctance to loosen the purse strings.

After a peripatetic career which has seen him play in Ukraine and Greece, Lucas enjoyed a breakthrough season in 2016-17, scoring 19 goals in all competitions for Deportivo La Coruna, including 17 in La Liga. His form attracted the attention of a number of clubs, with Everton reported to have agreed terms with the 27-year-old, before Arsenal and the lure of Champions League football emerged to seal the deal.

Arsène Wenger said: “He’s not only a goalscorer, he’s a guy who combines well with partners, who can give a final ball and makes good runs. He’s got a good eye for goal and had an outstanding season last year.”

He began his career with Atlético Madrid C and then moved to Rayo Vallecano before spells with Ukraine’s Karpaty Lviv and PAOK in Greece. He joined Deportivo in 2014, initially on loan.

Valencia’s Germany defender Shkodran Mustafi remains a target and a £30m deal is in the offing.