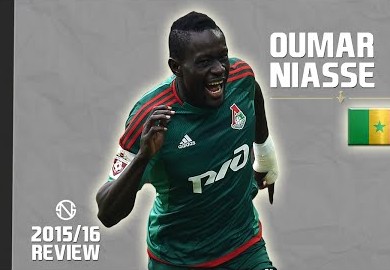 Niasse comes with pedigree – he was named Russian player of the year last season and has scored 12 goals in the Russian league this term.

He will be a like for like replacement for Steven Naismith, who was sold to Norwich City for earlier in the transfer window.

Niasse can operate as a winger and forward and will help Everton provide more ammunition in their frontline. He was delighted to be signing at Goodison Park.

“I know Everton is one of the big clubs here in England with history, the fans and the great players, so I’m very excited and happy to be here.

“I started to watch Everton more since the beginning of October because I had heard about their interest. I was interested to see how they play and how they have good young players.

“If you see players who are aged 20 or 21 and see them perform like that, you know you have a good coach.

“The manager has said exactly what he wants. He believes I can be a player who can add something to the team. It was not difficult to talk and understand one another.

“You can see also that he is a good person and I am really looking forward to playing for my new team.”

Martinez said: “We’re delighted because Oumar is a player we have been following for a long time.

“He is the right personality and someone who is in a very good moment of his career. He has had a lot of success in Russia and he brings a different quality to what we already have in our squad.

“I’m really pleased to be able to bring in Oumar in this window and we know he’s going to have a massive impact going forward. He brings a real hunger and desire to be successful into what is already a strong squad.”