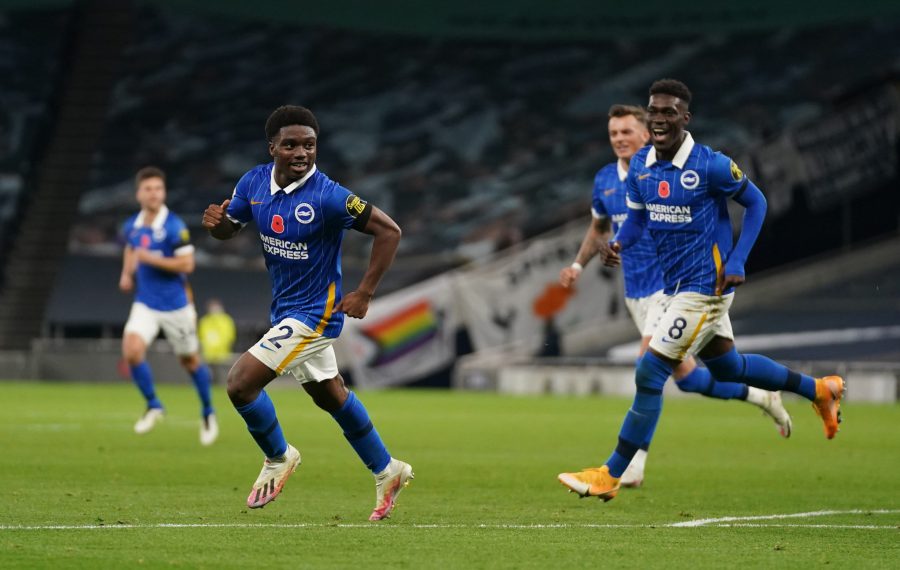 Ronald Koeman spent the summer pursuing Liverpool’s Gini Wijnaldum – and is still believed to be interested – but for now, Barca have a new midfield target in the Premier League.

Journalist and transfer specialists Fabrizio Romano recently said on his podcast Here We Go that the Catalan club considered Tanguy Nbdombele in the summer, but ultimately favoured Wijnaldum for his lower price tag. Their interest in the Tottenham man isn’t over though, and they could make a move next year.

“For January, Spurs fans can be sure the player is not going anywhere,” said Romano.

Tariq Lamptey has undoubtedly been one of the stars of the Premier League season so far, and the former Chelsea youngster’s form has not escape the attention of some of Europe’s biggest clubs.

According to the Daily Mail, Bayern Munich and Sevilla have been watching the 20-year-old this season, with Atletico Madrid adding themselves to the list of interested parties. Atleti already have another English full-back on their books, with Kieran Tripper becoming an integral part of their squad since arriving from Tottenham in 2019.

Brighton paid just £4m for Lamptey back in January, but could be set for a huge profit if they decided to cash in.

According to the report, the Nigerian has a €100m release clause, which pay deter some of the teams.

Chelsea and Wolves see him as replacements for Callum Hudson-Odoi and Adama Traore respectively, while United and Liverpool both signed wingers in the summer, leaving Leicester and Everton as the current front-runners.

After another disappointing night for Manchester United, the future of one of their biggest names has been cast into doubt once again.

Juventus director Fabio Paratici has added fuel to the never-ending speculation around Paul Pogba by saying to Sky Sports Italia: “We all care for Pogba here, one of many ex-players who gave Juve so much.”

To be fair to Paratici, he also went on to say: “It’s too early to talk about future objectives. We are concentrated on constructing this team for this season, that is where our focus lies,” but with Pogba’s continuous struggles to live up to his price tag at Old Trafford, it is a timely reminder that he does have suitors elsewhere.