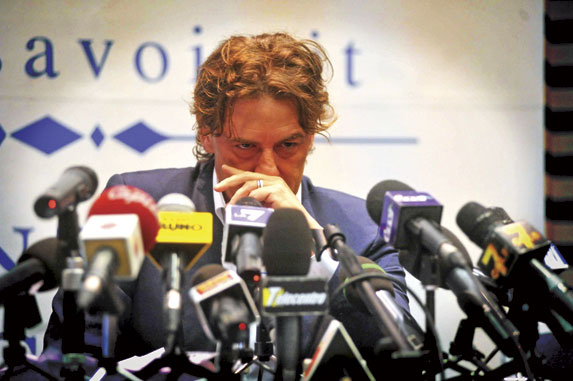 So then, another match-fixing scandal in Italy? Can it really be true? Unfortunately, the answer is yes. Five years after the infamous Calciopoli scandal involving Serie A giants Juventus, Italian football finds itself in sadly familiar territory, and this time the affair may well prove to be both bigger and more intractable than its infamous predecessor.

At the beginning of June, 16 people, including former Lazio and Italy striker Giuseppe Signori, were arrested and charged with being members of a gang that systematically fixed Italian football matches. Some of those arrested, including former Bari captain Antonio Bellavista, went straight to prison, while others such as Signori were put under house arrest.

If Calciopoli was essentially about a Machiavellian exercise of power and influence over referees in Serie A, the latest scandal would appear to be exclusively betting-related and concerns mainly second and third division games, many played during the season just ended. It is also about the dark shadow of organised crime and the outside manipulation of football by betting gangs, allegedly with links in Asia.

Like many investigations, this one started almost by chance, prompted by some strange happenings immediately after a third division game between Cremonese and Paganese in November. Five Cremonese players and a physio complained of feeling unwell after the game and were taken to hospital for tests. Traces of the tranquilliser lormetazepam were found in their urine, prompting suspicions that their half-time and pitchside drinks had been doctored. One of the players was so groggy that he had a serious car accident on his way home from the match.

In the end, the attempted doping failed as Cremonese won 2-0. The club, however, alerted the police, who initiated a widespread investigation which, based on information gained from thousands of mobile phone taps, saw arrests in places as diverse as Ancona, Ascoli, Bari, Benevento, Bologna, Como, Ferrara, Naples, Pescara, Ravenna, Rimini, Roma and Turin.

Initially, the investigation was focused on 18 games, five of them being Serie B matches and just one (Internazionale v Lecce, on March 20) in Serie A. Since then, on an almost daily basis, other games have been added to the list.

It needs to be said that in the midst of the inevitable media hype prompted by the latest Calcioscommesse scandal, it was difficult to sort out the genuine wheat from the chaff. Important names, such as Roma players Daniele De Rossi and Francesco Totti, along with ex-Italy striker Christian Vieri and current Atalanta captain Cristiano Doni, were bandied about with alarming alacrity, merely because their names had come up in various phone taps.

While they would seem to be totally extraneous to the scandal, the same may not be true, however, of Signori. Three times leading Serie A goalscorer in the 1990s and 28 times capped by Italy, the 43-year-old Signori is well known in the football community as an obsessive gambler. He is alleged to have waged £130,000 on the Inter-Lecce game in expectation of a “guaranteed” 3-0 win for Inter. (The game actually ended 1-0).

At an emotional press conference in Bologna in late June, Signori broke down and in tears swore he had done nothing wrong, admitting that he had been approached about various match fixes, but had always refused to have any part. Unfortunately for Signori, however, the judge who days earlier had ordered he be released from house arrest, had also written “the proof that has been gathered, thanks to testimony from other defendants, fully confirms the charges that have been made against Signori”.

It is alleged that Signori, known as “The Chinaman” because of his Singapore gambling connections – they would place the bets for him – was the chief player in a Bologna-based gang which thought little of gambling up to £350,000 on a “guaranteed” fixed result. Inevitably, the games in question were fixed thanks to the collaboration of a couple of key players in a given team. Investigators even claim to have found evidence of a corruption price list: €300,000 for a Serie A game, €120,000 for Serie B and €40-60,000 for the lower divisions.

Other alleged protagonists in the betting gang include Bellavista, ex-Ascoli player Vincenzo Sommese, Marco Pirani, an Ancona-based dentist, Massimo Erodiani, who runs betting shops in both Ancona and Pescara, and the former Cremonese goalkeeper Marco Paoloni, who is accused of having attempted to drug his team-mates during the Cremonese-Paganese game.

The scandal has hardly taken Italian football by surprise. For example, for much of this winter, Gazzetta Dello Sport has run a series of investigations about the infiltration of organised crime into Italian football. Headlines such as “Betting Alarm – The Authorities Must Help”, “Gomorrah In Football – Too Many Wagers On Chievo v Sampdoria, Brescia v Bologna” and “Match Fix Alarm – Cesena, Sampdoria, Lecce and Brescia Under Observation” have alerted readers to the phenomenon.

In a country where lower-level clubs are regularly in financial difficulty and often fail to pay their players, the temptation to round off or indeed replace one’s non-existent salary with a bit of gambling may have proved too much for some players. Once they get into the habit they are easy targets for organised crime in search of insider collaborators.

Italy’s senior anti-Mafia investigator Piero Grasso recently told the weekly L’Espresso: “Make no mistake, Mafiosi have made the most of the chance to get into a business [betting] in which they can both make a lot of money and at the same time calmly invest and recycle huge sums.

“Investigations carried out by many different anti-Mafia units confirm that organised crime is taking over a huge chunk of the betting market, a market whose profits, including legal profits, is on the increase. This whole area is becoming the new Mafia frontier.”

Grasso also highlights another well-known phenomenon, the control/ownership of lower level, mainly southern clubs, by organised crime. He says although the various Mafia clans have not been able to penetrate Serie A clubs they have their hands on many lower level ones, commenting: “Above all, it is the need for local consensus which attracts them to football, because it gives them power, which in turn becomes useful at election time.”

Grasso also warned footballers about the company they keep, in the process confirming media reports Manchester City’s Italian striker Mario Balotelli had spent a day with a Camorra family in Naples. “Carabinieri in Naples tell us that the Lo Russo clan and the Scissionisti were seen in the town, showing Mario Balotelli around,” Grasso said. “What Balotelli does not understand is that perhaps, one day, they will come to him looking for a favour. In places like Palermo and Naples, players need to be careful about the company they keep.”

Grasso also pointed to the recent experience of the Serie D Calabrian club Cittanova. “It turns out that one member of the Pesce clan from Rosarno was signed by Cittanova,” he said. “At that point, who would have the nerve to tell him to sit on the bench for a game? On the contrary, this guy ended as both captain and owner of the team. A few months ago, however, the club was closed down because of [infiltration by the Calabrian Mafia].”

Confirmation of Grasso’s worst fears appeared to come from a series of photos showing Antonio Lo Russo, son of Camorra boss Salvatore Lo Russo, standing on the sidelines at the Stadio San Paolo during one of the suspect games, Napoli v Parma in April last year, which ended with a “surprise” 3-2 away win for Parma. A carabinieri report at the time, reproduced by Il Messaggero, read: “Many people linked to the
Lo Russo and Scissionisti clans placed heavy bets on a Parma win.”

Where was the Italian Football Federation when all this was happening? To be fair, the federation points out that it simply does not have sufficient resources – either legal or personnel – to carry out the sort of policing that would be necessary to combat this phenomenon.

In the meantime, the federation is in a similar situation to five years ago when it rushed its Calciopoli investigation through the summer in order to be able to draw up the fixture lists (complete with freshly relegated sides such as Juventus) in time for the new season. It will be the same this summer, if only because both promoted Atalanta and Siena may be indirectly involved in the scandal.

Despite that, federation president Giancarlo Abete has promised its own enquiry will be done and any disciplinary sanctions imposed by the end of July/beginning of August. Chief investigator Stefano Palazzi has his work cut out. Rest assured, this one will run and run…