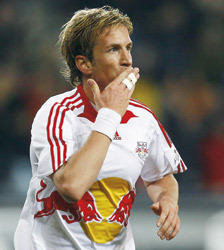 Salzburg striker Marc Janko is currently Europe’s most lethal goal scorer and is being mentioned as a possible new recruit for Blackburn, Middlesbrough and Tottenham.

The 25-year-old Austrian, who is enjoying a runaway lead in the race for
the European Golden Shoe, has also been linked with Sunderland, Hull City, Portsmouth and Everton along with Serie A club Roma and German sides Schalke and Hertha Berlin.

Janko has been in great form in the Austrian Bundesliga, scoring 27 goals in 19 matches and wiping out Oliver Bierhoff’s club record of 23 for Salzburg. Now the £4million-rated national team star is ready for a move, saying: “I definitely want to play in the Premier League. Tottenham are certainly among my favourite clubs.”

A move abroad in the January transfer window seems a realistic option. “We have had good talks with three English clubs and one has already relayed its interest in writing,” says Janko’s agent, Georg Stangassinger.

The 6ft 5in forward seems to have finally laid a long injury jinx and is now showing his predatory skill. Janko, whose mother, Eva, won an Olympic javelin bronze in 1968, has scored on average every 53 minutes this season for Salzburg as well as chalking up goals against Italy, France and Serbia for his country.

Blackburn have watched him several times, according to their scout Martin Glover, who says: “There is a good reason half of Europe are chasing him at the moment. Janko is top class and we would certainly like to have him on board.”
Harry Miltner