Displaying the Job-like patience for which football clubs are renowned, teams in Serie A have abandoned a self-imposed quota system, after an experiment lasting all of one season.

The Italian Football Federation (FIGC) has confirmed that clubs in the top flight will be allowed to sign two non-European Union players per season from the start of the 2011-12 campaign. This represents an increase on the one player per club imposed in 2010, introduced in an effort to encourage clubs to invest in home-grown talent, following Italy’s miserable performance at the FIFA World Cup in South Africa.

The change comes at the behest of some of Italy’s biggest clubs, who complained that  their Champions and Europa League chances were being undermined by the quota system.

In recent months they’ve often been in the news  for the wrong reasons, so kudos to Real Madrid who last night hosted a benefit dinner on the pitch of the Santiago Bernabeu Stadium to raise funds for Realmadrid Foundation, in collaboration with Fundacion Chocron. Proceeds will be used to rebuild San Gerardo School in Haiti, which was destroyed by the earthquake that hit the country 18 months ago.

There will also be an auction, where people can bid for items such as the tennis racket Rafa Nadal used when he won the French Open, Xabi Alonso’s boots and Cristiano Ronaldo’s signed shirt from the Copa del Rey final, or a dinner for two with Vicente del Bosque at the Sergi Arola Gastro restaurant in Madrid.

Judgement day is nigh for suspended FIFA official Mohamed bin Hammam. The Qatari president of the Asian Football Confederation will face FIFA’s ethics committee on July 22 to answer allegations of bribery during his presidential election campaign.

The case against bin Hammam and Caribbean Football Union employees Debbie Minguell and Jason Sylvester has been built with help from a team of former FBI agents hired by FIFA.

The trio are accused of involvement in a plot to bribe Caribbean football officials with $40,000 cash payments ahead of bin Hammam’s failed election challenge to FIFA President Sepp Blatter. If he goes down, we can expect bin Hammam to try and take as many down with him as possible.

Twenty four hours after Carlos Tevez announced his desire to leave Manchester City to move closer to his family, a potential new destination for the Argentinian has emerged. Malaga (5992 miles from Tevez’s home town of Buenos Aires), who were bought last year by wealthy Qatari investor, Abdullah ben Nasser Al Thani are the latest club to be linked with the striker.

Harry Kewell, who in yesterday’s World Soccer Daily, came in for criticism based on reports of his outlandish demands to return to play in Australia’s A-League, has been defended by his agent Bernie Mandic. Presumably his mother was unavailable for comment.

“For the record this is what we have proposed,” said Mandic when asked to clarify Kewell’s demands.

“If Harry plays for a team in the A-League he does not get paid for any of his home games.

“He only gets paid an equivalent of 70 per cent of gate takings for away games if his presence generates more people than that particular club’s average.

“If he is injured and misses 10 matches he does not get paid, unlike some marquee players who cost a fortune and were injured for many matches. And if, God forbid, he is injured for the whole season he gets nothing.

Mandic has previous history with the A-League, whose player recruitment policy he once described as ”pitifully poor and amateurish.”

”The expectation given to players by agents is unrealistic about the new league,” he wrote in 2004. “I honestly believe anybody who is going to pay any player over $150,000 per year is being financially negligent for the long-term future of a club.”

Which certainly puts Kewell’s $2.5 million demands into some kind of perspective.

World Soccer columnist Jim Holden, who has written about the ridiculous sums of money English clubs have been paying to sign English players, have noted with interest Aston Villa’s decision to turn down a £15 million bid from Liverpool for Stewart Downing.

Aston Villa are reported to be holding out for £19million, although there is talk Joe Cole could be included in a deal should new Villa manager Alex McLeish want him. It’s hard to imagine McCleish’s popularity rating dropping any further at Villa Park, but the signing of Joe Cole might test that theory.

A Chinese real estate tycoon who pledged to spend 500 million yuan (£48 million) to boost the sport in the country over the next three years has taken umbrage at comparisons with Chelsea owner Roman Abramovich.

Wang Jianlin, the chairman of Dalian Wanda, even went as far as to say he was ashamed to be compared to the Russian oligarch.

“It’s a shame to be compared to the Russian billionaire. I feel ashamed to be mentioned with him,” he said.

Displaying a frankness rarely shown by the journalistic community when discussing the Chelsea owner, Jianlin can, after his tirade, probably wave goodbye to the invite to Abramovich’s luxury yacht.

“He (Abramovich) accumulated his wealth by monopolising his country’s natural resources,” Wang was quoted as saying in the China Daily newspaper on Wednesday. “I set up my business empire step by step, competing fiercely in the market.”

He added: “(Abramovich) treats soccer as a kind of amusement in his luxury life while I am really concerned about the sport’s poor situation in the country.

Rivalling Cesc Fabregas’ will-he, won’t-he, and do we really care anyway, move to Barcelona, Alexis Sanchez proposed move to the European champions has now progressed to the point where it can be accurately be described as ‘protracted’. A few more days like this and it will be officially a saga.

The Chilean was expected to complete a move to Barcelona and indeed expressed a wish to move there, but Udinese have continued to negotiate with other clubs.

“Negotiations with other clubs are at an advanced stage, but we have to take into account that Sanchez strongly wants to join Barcelona,” director of sport Fabrizio Larini told Radio Kiss Kiss.

“We know that in these cases the preference of the player is very important.”

Barcelona set an ultimatum by declaring the last offer was “definitive,” but Udinese, perhaps looking to squeeze a few more euros out of the deal, appear in no hurry to sell.

Owen Hargreaves refuses to accept that his playing career is over. The England international, who has barely kicked a ball in anger – or even jest, for that matter – in the past three years, was expected to announce his retirement after being released by Manchester United at the end of the summer. But, in an an attempt to demonstrate his fitness, the former Bayern Munich midfielder has launched a series daily exercise videos on youtube.

Here’s footage of Hargreaves running on a treadmill:

Here, he rolls his leg over a giant inflatable ball:

We wish him well, admire his tenacity and  persistence, but shudder at the thought of that first block tackle.

It may have been an academic match in that neither Canada or Nigeria could qualify for the knockout stages of the Women’s World Cup, but to turn off the lights in the second half of their match on Tuesday seemed a little bit harsh.

The floodlights in Dresden’s Rudolf-Harbig-Stadion went out with Canada and Nigeria still scoreless in the 84th minute. The match was suspended, but the players resumed play seven minutes later and within a minute of the restart Nigeria scored the winner.

Here are the players, standing in the dark, looking a little bemused, wondering if they’re unwitting victims of a Malaysian betting scam, or just plain indifference. 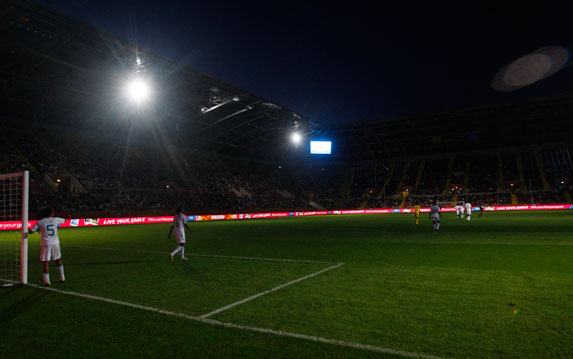