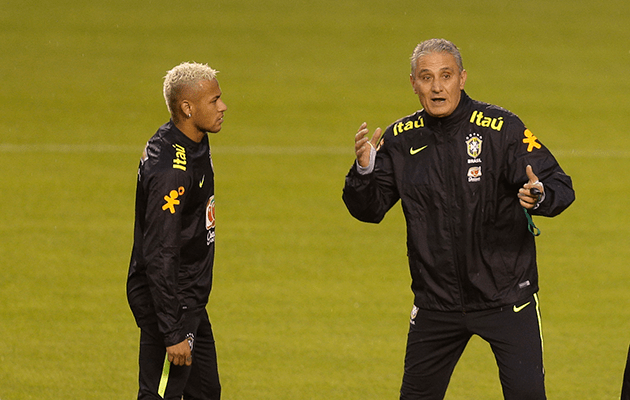 Coach Tite brings his Brazil team to Wembley on Tuesday for the first game against European opposition.  Their exploits – both the results and the style with which they have been achieved – against rival South American teams have established Brazil among the favourites for the World Cup in Russia. A group of players who under Dunga were floundering – after a third of the qualification campaign Brazil were down in sixth, outside the qualification places and the warning lights were flashing – are shaping up to be the most attractive Brazil team in decades.

Behind this extraordinary turnaround are the usual suspects – talent, hard work and a little bit of luck.

The talent is the wonderful individual talent that Brazil can usually call upon – from the likes of Neymar, Gabriel Jesus and Phillippe Coutinho to the attacking full backs Daniel Alves and Marcelo and fine young centre back Marquinhos.

Then there is the hard work of Tite. Perhaps the defining phrase of the campaign was Tite’s declaration that, “I have learned how to learn.” A coach who made his name at the turn of the century as a 3-5-2 specialist has kept adding fresh areas of knowledge. He used his time with Argentinian midfielder Andres D’Alessandro to get an in depth perspective on a European style 4-4-2. And in the last few years he made a point of studying top-class European football, paying special attention to the way that a high defensive line enables a team to stay compact and establish numerical superiority in midfield. This has been applied to the national team.

The little bit of luck came when it was most needed. In hindsight it seems clear that the defining match of the campaign was Tite’s first game in charge, away to Ecuador in September 2016 – and it ended up being a defining moment for Ecuador as well.

At the time Ecuador were second in the table, trailing Uruguay only on goal difference. They were feared opponents at the altitude of Quito, and Brazil went there with some trepidation – which seemed to be well justified in the first half. Ecuador’s left winger Jefferson Montero was quick to establish an advantage over Daniel Alves, who could only stop him with a sequence of fouls. Paulinho came across to help out with the marking, Ecuador wasted some promising opportunities and Brazil played their way into the game.

With 20 minutes to go the match was still goalless. At this stage, Brazil would probably have been happy with a point. And Tite may well have been thinking that the time had come to replace his debutant centre forward Gabriel Jesus, who had looked bright and quick, but who had spent much of the game wandering into offside positions.

Out of the blue, Gabriel Jesus was able to use his pace to latch on to a loose defensive pass. He was brought down by the goalkeeper, and from the penalty spot Neymar stroked home the first goal of the Tite era.

Ecuador looked to hit back. But just four minutes later, right-back Juan Carlos Paredes mistimed a tackle, picked up a second yellow card and was sent off. Fortune was smiling on Brazil. Their right-back Daniel Alves had committed more fouls, but it was Ecuador who were down to ten men.

They pressed for an equaliser, and with the crowd behind them they threatened. But Brazil kept them out. And in the last five minutes, in contrasting styles, the now fully confident Gabriel Jesus added two magnificent goals to make the final score a morale boosting 3-0.

Or morale sapping from an Ecuador point of view. Had they won, which especially in the first half appeared a real possibility, they would have gone three points clear at the top of the table and would have retained the momentum that would surely have carried them to Russia. Instead they began to fall apart. Of the 11 games remaining in the campaign they won just two. They sacked their coach and finished in a lamentable state, with six straight defeats.

Brazil, meanwhile, climbed only one place in the table, up to fifth, the play-off position. But everything had changed. Defeat would have piled on the pressure. Instead, they had eased their minds, removed the doubts about failing to qualify, and three rounds later they were top of the table, and just about to really hit their stride.