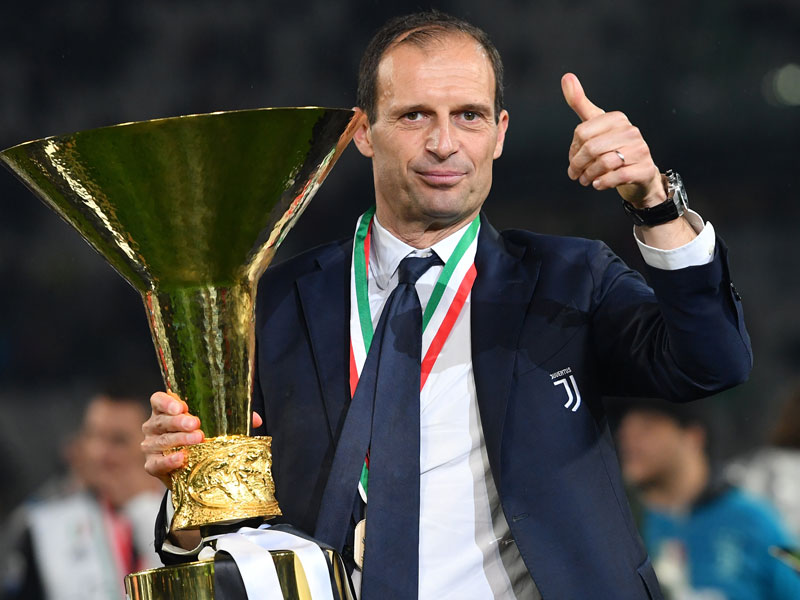 Last Friday morning it was raining heavily in Turin so Juventus coach Massimiliano Allegri opted to take team training in the club gym. He summoned not just the players but also the entire back room staff, physios, medics et al. Before training began, he opted to say a few words, getting straight to the point:

“I want to tell you that today we’re going to have a pretty tough session because on Sunday (versus Atalanta), we’ve got to play really well because this will be Andrea’s (Barzagli) last game…”

38-year-old Barzagli did indeed play the last game of a distinguished professional career in yesterday’s 1-1 home draw with Atalanta. However, Barzagli, a World Cup winner in Marcello Lippi’s Italy team in Germany in 2006, was not the only person for whom the game had a particular significance as Allegri acknowledged, adding:

And so saying, Allegri broke the stunning news that after five hugely successful years with the “Old Lady”, he would be parting company with the Italian champions. You might argue that five consecutive Serie A titles, four Italian Cups and two (losing) Champions League Finals in five seasons represents an impressive track record, good enough grounds to renew a fruitful working relationship. Not in Turin, apparently…

The point is that, as observers know all too well, Allegri failed to win the one trophy which, above all, Juventus wanted, namely the Champions League. Worse still, he failed to win it in the season when Juventus had hired CR7, Cristiano Ronaldo, in a reported €340 million dollar “deal of the century”, in order to make their challenge all the more irresistible.

Observers will ask why on earth Juventus have just separated with the coach whose domestically all dominant side had the league title practically wrapped up by Christmas. The answer is straightforward enough even if it hardly seems just. Allegri is out because he failed to win, or at least get to the Final of, this year’s Champions League.

The all triumphant Juventus season went badly wrong, only once all season. That came in Turin with that quarter final elimination by Ajax last month. On the night, club President Andrea Agnelli immediately went on TV to say that the best team had won, compliments to Ajax and Allegri remains our coach.

Many of us applauded those words. Here, for once, was a club owner willing to eschew the old “sack the manager/coach” routine in the immediate wake of a bitter disappointment. However, in the month since Juventus were eliminated, minds seem to have changed and a different council has prevailed.

Media speculation suggests that Allegri, who had hoped to stay at Juventus, began to feel increasingly isolated, as he became the object of renewed Juve fan criticism. In truth, there are those demanding Juve fans who remarkably have never warmed to Allegri and his style of football.

The most recent wave of criticism began after Juve’s second round 2-0 Champions League away loss to Atletico Madrid. Even if the subsequent splendid comeback with a 3-0 defeat of Atletico in Turin got the critics off his back, Allegri again came in for bitter, not always fair criticism after the Ajax elimination. Some commentators have suggested that, at that moment, the coach would probably have liked a little more “protection” from senior club figures.

Last Saturday, however, when Agnelli and Allegri faced the press, there was no complaining, no slammed doors and no smashed plates as the pair announced the end of the road. The tone was civilised, there were many expressions of “grazie” and, unusually, the entire first team squad turned up in the press room to applaud Allegri out the door.

Furthermore, Allegri was presented with a special team shirt, “History Alone” which was intended to emphasise the particular place he will always occupy in club history. The comments of the major protagonists, however, did underline just how difficult a parting this had been:

“I am here to celebrate Allegri, someone who on his own has rewritten club history, not since the ’30s had the club won five titles in a row…and it was difficult for us all to decide that this was the right moment to end an extraordinary cycle…When you run a company, you have got to know when to take decisions…only time will tell if they were the right ones”, said Andrea Agnelli.

For his part, Allegri seemed to indicate that, even if he was willingly walking the plank, it had not been his idea, saying:

Media speculation had suggested that Allegri’s request for a pay-rise (he is currently on €7.5 million per season) and for at least three new players had been a point of contention between the two parties. This may not have been the case. It seems that negotiations never got that far, rather they were blocked by a different vision of the future between Allegri and two senior club figures, Chief Football Officer, Fabio Paratici, and club Vice-President Pavel Nedved.

In particular, Nedved was the person who pushed hard for a change of coach, persuading Agnelli to make the break. The Juventus President has always got on well with Allegri and was reportedly very reluctant to let him go.

As of now, the lid is off on at least two rounds of speculation – (1) Who will replace Allegri? and (2) Where next for Allegri? These are early days but what about Simone Inzaghi and Bayern Munich as the two answers.

It is not yet clear if Allegri will opt for a “time out” after five intense years at Juventus, so the Bayern speculation may be premature. However, in time, he will obviously be in line for work with such as Bayern, Barcelona, Real Madrid, Chelsea, Arsenal and the other usual suspects etc…

As for Inzaghi, in the week when he led Lazio to an Italian Cup Final 2-0 win against Lazio, his merits are there for all to see. In three seasons with a less than galactic Lazio, he has built a very competitive team capable not only of winning this year’s Italian Cup but also of twice finishing 5th in Serie A.

The ironic thing about Inzaghi is that he initially appeared to have been appointed on a short-term caretaker basis. Having been named coach in April 2016, due to replace Stefano Pioli from there to the end of the season, he was then replaced for the following year by Argentine Marcelo Bielsa. When the latter changed his mind and failed to show in the summer of 2016, owner Claudio Lotito then hurriedly recalled Inzaghi who has been coach ever since.

Of course, like a lot of big clubs, Juventus would be very interested if Man City coach, Pep Guardiola, were to come on the market. That, however, may be a story for another day.

One other much touted big name is that of former Juventus, Chelsea and Italy coach, Antonio Conte. Sources in Turin, however, say that this is a non-starter because of the brusque, unexpected manner in which Conte, after three winning years, left the club five years ago to take up the job of Italy coach. Andrea Agnelli apparently has not forgiven Conte that unexpected, eve of season walkout.

One final “Roman” piece of news concerns AS Roma midfielder Daniele De Rossi who last week confirmed that after 19 years, he and the club had come to the end of the line. The 35-year-old, 117 times capped international put it this way:

“When I played this season, I thought I did fine…if it was up to me, I would have renewed the contract of a player like me for what I could offer…but, like with you guys (media), they boot you out and there is nothing you can do…”

De Rossi is leaving Roma but he is not necessarily retiring. The Middle East and/or North America could be his next stop if, as seems likely, none of Europe’s top clubs will be interested. A terrific midfielder who combined battling grit with real class, he often seemed like Serie A’s answer to Roy Keane (the player).

Needless to say, in actions which recall the fuss that marked Francesco Totti’s retirement two years ago, some Roma fans are less than happy to witness the departure of yet another team icon. We may not have heard the last of this particular saga.