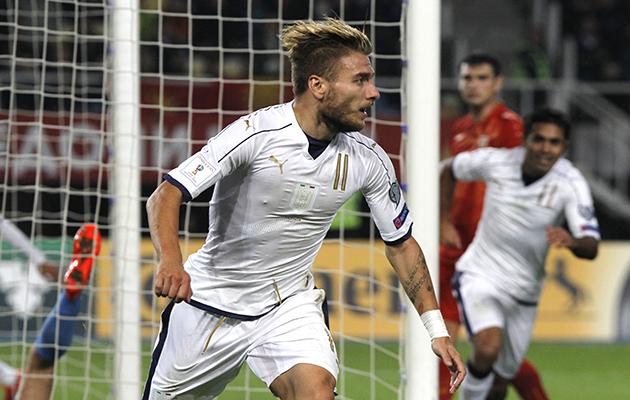 The least you can say about Italy’s last gasp 3-2 World Cup qualifier win over Macedonia in Skopje on Sunday night is that it was far from impressive. With an hour of the game gone, Italy were not only 2-1 down but were also looking fragile, having lost both self-belief and tactical organisation.

In the end, it was Lazio striker, Ciro Immobile, very much a protege of coach Giampiero Ventura, who saved the night with 75th and 92nd minute goals. Immobile’s goals were the expression of a late Italy revival but, on other occasions and against a stronger side, that revival might have counted for nothing.

Put it this way, for at least 20 minutes in the second half, Italy looked as if they had already compromised their Russian World Cup qualification. Speaking to RAI TV after the game, captain Gigi Buffon offered a brutally honest assessment of his team’s performance, saying:

“It was a strange game. We took the lead but we did not handle it in the right way…We gave away too many clear chances…The best thing about this game was the result and the fact that, in the end, we gave it our all. Sometimes, you reap more than you sow…”

Coming in the wake of Italy’s faltering performance in their 1-1 draw with Spain in Turin on Thursday night, this game sounded further alarm bells. For the second match in a row, did new coach Ventura get it wrong, not only tactically but also pyschologically?

On the tactical front, Ventura’s most obvious “error” concerned his midfield. Here he played PSG schemer Marco Verratti, flanked by Fiorentina’s Federico Bernardeschi and Milan’s Giacomo Bonaventura. The problem here was that, in this way, Ventura left himself with a “light” midfield in which there was neither defensive filter nor protection for Verratti.

Players like Daniele De Rossi and Marco Parolo, both understandably rested after their exertions against Spain, were badly missed from a porous midfield which left the whole side looking unbalanced. Not for nothing, Italy found themselves 2-1 down after both Verratti and Bernardeschi gave the ball away in situations in which they found themselves just a little short of options.

Those mistakes not only led to Macedonia’s 57th and 59th minute goals from Palermo striker Ilija Nestorovski and midfielder Ferhan Hasani respectively but they also prompted an embarassing quarter hour when Italy went missing. Had it not been for Buffon in goal, Italy might well have conceded a third goal in this period. And all this against a country that currently stands 146th in the FIFA rankings.

There had been a premonition of difficulties ahead in the opening minutes when the two “Italians” in the Macedonia side, Nestorovski and Genoa’s Goran Pandev, both came close to scoring. The Palermo man even managed to catch Buffon off his line and struck a splendid volley over his head only to see it smash against the crossbar.

An opening Italian goal in the 24th minute from Andrea Belotti, significantly another Torino protege of Ventura, should have set up Italy for a comfortable win. Yet, as Buffon acknowledged, the azzurri failed to control the game in the manner one might have expected.

And here, we come to another question mark about Ventura. The inability to “administer” a game concerns mental attitude as much as tactical organisation. For the time being, there is the suspicion that Ventura’s Italy only really get going when all seems lost.

We have said it before but it is worth repeating. Could it be that a coach who has won a thousand relegation battles has yet to adapt to a situation in which, rather than having to fight an uphill battle, he has to take the game to his opponents and dominate them mentally as much as physically?

In the end, Ventura made his own telling contribution to the Italian recovery by bringing on Parolo in midfield as well as Eder and Sansone in attack. He thus steadied the Italian midfield whilst at the same time fielding a four man attack of Candreva-Eder-Immobile-Sansone which went on to win the game. Yet, as Gazzetta Dello Sport’s Monday headline concluded, “What A Sweat-Out That Was”.

Next stop for Italy is another qualifier away to little Liechtenstein on November 12th, followed by another prestige friendly clash with Germany at the San Siro three days later. The first of these two games should give Ventura a chance to get his house in order whilst the second will prove to be yet another litmus test for his side’s progress…or lack of.