Sepp Blatter believes FIFA has committed a mistake by expanding the World Cup finals from 32 to 48 teams in 2026.

The world federation’s congress in Bahrain in May will endorse a decision taken in January by the FIFA Council at the behest of president Gianni Infantino.

Offering more World Cup finals slots and increasing the levels of development funding were two key planks in Infantino’s manifesto when he campaigning to succeed banned and disgraced Blatter as president in February last year.

Now Blatter has expressed his disapproval in a what is now for him a rare newspaper interview with Hungary’s Nemzeti Sport**.

Originally the World Cup was conceived as a 16-team event. This was lifted to 24 in 1982 and then 32 in France in 1998, always with an initial group stage of four-team mini-leagues. In 2026 the group stage will feature 16 mini-leagues of three teams each; it has yet to be decided whether drawn matches will be decided by penalty shootouts.

Blatter said: “In Spain in 1982 the second group stage featured three-team groups but we took it out of the system because it did not work. The 32-team World Cup has worked superbly since 1998.

“But 48 teams playing in groups by three is not good. Three-team groups are in conflict with the spirit of the game with one team always having a free day while the other two play.”

Blatter’s favourite World Cup from all his active years in FIFA between 1975 and 2015, as general secretary then president, was 2010 in South Africa.

He said: “[This is] because no-one, including the members of FIFA’s executive committee, believed that Africa would be capable of organising a World Cup — and South Africa was not just simply capable of it, but organised a fantastic World Cup and proved that Africa is not simply a continent which was once colonised but an independent, proud continent.”

Blatter also conceded that it was during the 2010 World Cup that he changed his mind about opposing goal-line technology.

He said: “It was a long route to the acceptance of goal-line technology. For me personally it was England’s match in South Africa when Frank Lampard’s goal against Germany was not given which convinced me that there was a need for this assistance.” 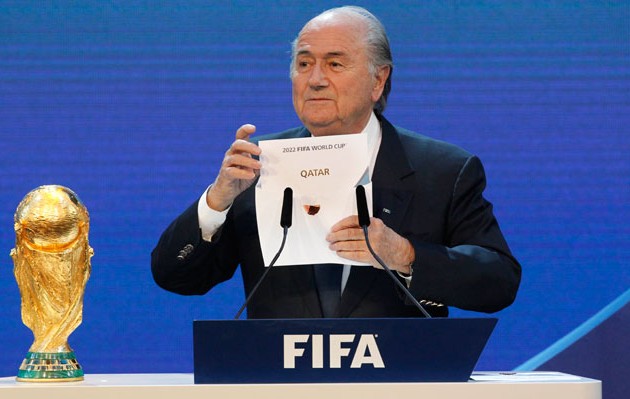 Beginning of the end…Sepp Blatter names Qatar as the host of the 2022 World Cup.

However Blatter believes firmly that it was the World Cup which brought about his downfall or, more specifically, the controversial awards in December 2010 to Russia and Qatar of the 2018 and 2022 finals.

Asked which influences were behind his eventual suspension from all football by the FIFA ethics committee, he said: “I could say that England and the United States were bad losers. The English wanted to be awarded the 2018 World Cup and the US wanted 2022.”

Not that he was content with the outcome of the vote by the executive committee.

Blatter had hoped for awards to Russia and the US because “this would have been a good message for FIFA’s sponsors, partners and for our ‘Handshake for Peace’ campaign if we had taken the World Cup to the two great players in geopolitics.”

He blamed the 2022 vote shift on the French.

Blatter said: “It was due to the intervention of the French President Nicolas Sarkozy with Michel Platini [then UEFA president and a FIFA vice-president]. This changed four votes . . . otherwise, the US would have won 12-10.”

Asked if he believed he would still be FIFA president, in that case, Blatter said: “Probably. Not in my dreams in 2010 could I have thought that in 2015 these would be the consequences of that decision.”