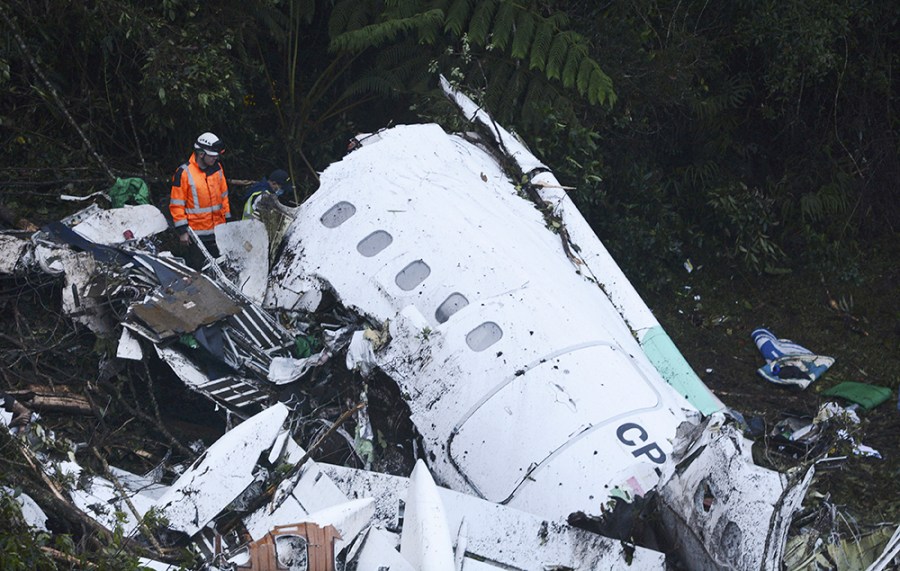 The high cost of air travel for the continent’s international competitions prompts national associations and clubs to seek out the most economic prices and airlines.

But the risk has been pointed up in a report by Colombian investigators who identified a catalogue of human error and incompetence as leading to the November 28 crash in which 71 people were killed near Medellin.

The Chapecoense squad, from Santa Catarina in southern Brazil, were on the last leg of their flight to play Atletico Nacional in the first leg of the Copa Sudamericana final when their plane came down. Only six people survived; 21 journalists were among the dead.

A report by the Colombian civil aeronautics board concluded that the LaMia plane left Santa Cruz in Bolivia with a full load of fuel.

However the black box recorders have shown that it lacked the reserve supply demanded by international regulations so it could fly for an hour and a half beyond its destination.

Voice recordings from the cockpit and Colombian air controls confirmed that the pilot, company co-owner Miguel Quiroga, and his co-pilot were aware of the lack of fuel.

Freddy Bonilla, Colombian Air Security Secretary, said: “Both talked about the possibility of refuelling in Leticia [on the border between Brazil, Peru and Colombia] or in Bogota.”

However they did not stop at either airport and the fuel capacity was reduced by the extra power needed to fly into a headwind when the plane entered Colombian territory.

The report also blamed negligence by flight controllers in Bolivia for approving an illegal fuel plan and not signing off on the official documentation.

In addition, the plane was allowed to take off from Santa Cruz despite being overweight.

A Bolivian airport official has sought asylum in Brazil after being accused of “dereliction of duty and assault on flight safety.”

The Colombian report described how, once the aircraft had passed over Bogota, the pilot was told to say that given the fuel levels he would need to make a “direct descent”.

However the crew did not tell Medellin air traffic control and accepted entering a holding pattern. Eight minutes from the incident, the co-pilot told air traffic control that the plane needed a “priority” landing but not the higher-grade “emergency.”

Six minutes from the plane’s scheduled landing the four engines began to shut down one by one from fuel starvation. That led to an electrics failure three minutes before the crash. However the crew did not tell air traffic control of the cessation of the engines and, three minutes later, it crashed.

The final report will be released next April after which criminal action is possible.