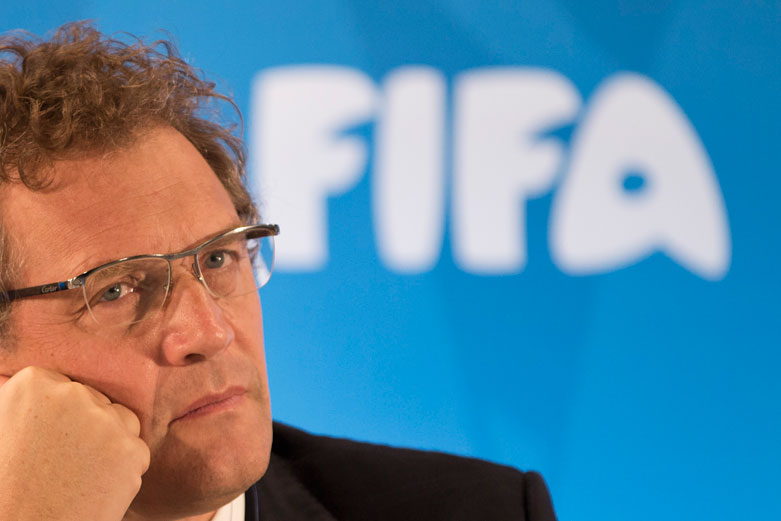 The length, depth and breadth of the scandal enveloping FIFA expanded to within one step of the president’s office overnight when Jerome Valcke, Sepp Blatter’s trusted No2, was relieved of his duties with immediate effect.

The Frenchman was released ‘effective immediately’ from his role as secretary-general after another tumultuous week. On Monday the United States Attorney-General Loretta Lynch warned of more arrests in the offing. Then, yesterday afternoon, came complex allegations involving Valcke over World Cup ticket sales.

Valcke was not immediately available for comment, having turned around a charter flight to Russia where he had been heading for events marking 1,000 days to the country’s staging of the 2018 World Cup finals. His FIFA duties will be taken over on an interim basis by finance director Markus Kattner.

In line with FIFA statutes the only man with authority over the employment status of the secretary-general is the president, with the approval of the executive committee. Hence Blatter duly conferred with the members of the emergency committee, the heads of the six regional confederations including UEFA’s Michel Platini.

A statement from the world football federation said: “FIFA today announced that its secretary-general, Jerome Valcke, has been put on leave and released from his duties effective immediately until further notice. Further, FIFA has been made aware of a series of allegations involving the secretary-general and has requested a formal investigation by the FIFA ethics committee.”

Cornel Borbely, chairman of the investigatory chamber of the ethics committee, followed up with a statement of apparent confirmation.

This statement said: “The Investigatory Chamber of the independent Ethics Committee takes note of the media release of FIFA from Thursday night. The chamber points out that – as a matter of principle – it will analyze all information that is brought to its attention of its own accord. The question of whether an investigation is pending in a specific case, will not be commented upon.”

The intriguing note struck by the FIFA statement was in separating Valcke’s release ‘from his duties’ from a subsequent reference to the allegations which had erupted about complex allegations concerning World Cup ticket sales.

During all the latest scandals swirling around FIFA Valcke has remained a solid figure at the core of the world football federation, keeping the operation ticking over.

Only one recent issue brought him to the scandal’s centre stage. This was the controversial £10m payment made by the 2010 South African World Cup organisers to the former CONCACAF president Jack Warner. Valcke insisted that he had effected the payment out of funds due to the South Africans and was only obeying orders from the late Julio Grondona, then FIFA’s finance chairman.

Valcke had been expected to leave FIFA after the election of a new president next February 26. He made his impending departure plain during a news conference on the eve of the World Cup qualifying draw in St Petersburg in July. Speculation has followed this week that he was already negotiating the terms of his departure but had failed to reach agreement.

Outrageous accusations
Yesterday afternoon Valcke was the focus of a news briefing about his reported role with regard to World Cup ticket sales.

The allegations concerned a claim by a Zurich company, JB Sports Marketing, that it had been misled by Valcke over a contract with FIFA to sell VIP ticket packages for the 2013 Confederations Cup and 2014 World Cup.

Benny Alon, a former Israeli footballer now resident in Arizona. said JB had understood that the surplus of up to four times the face value of the tickets themselves would be split 50/50 with FIFA, with Valcke undertaking a personal role as go-between.

Later FIFA assigned the contract to the Byrom-owned Match companies whose subsidiaries held exclusive rights for hospitality on the one hand and ‘FIFA family’ ticketing on the other. JB complained later that the tickets delivered were not of the grade for which it had paid.

Alon was reported in France as being ‘close to’ Michel Platini, the president of European federation UEFA who is favourite to succeed Blatter as head of FIFA.

Within hours Valcke’s lawyer, Barry Berke, issued a vehement denial of any wrongdoing.

Berke said “Jerome Valcke unequivocally denies the fabricated and outrageous accusations by Benny Alon of alleged wrongdoing in connection with the sale of World Cup tickets.

“Mr Valcke never received or agreed to accept any money or anything else of value from Mr Alon.

“As has been reported, FIFA entered into an agreement with Mr Alon’s company, JB Sports Marketing. That agreement and FIFA’s subsequent business dealings with Mr Alon were vetted and approved by FIFA and its legal counsel.”

Both Valcke and Blatter had hired US lawyers to represent their interests in the wake of the US Department of Justice investigation into the so-called FIFAGate corruption scandal. Berke is counsel with the New York firm Kramer Levin Naftalis & Frankel.