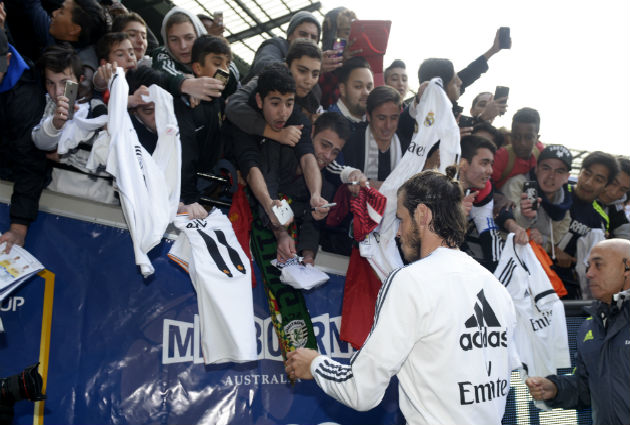 Real Madrid star Gareth Bale, has put a damper on the prospect of either Manchester Utd or Chelsea signing him this summer.

Rafa Benitez was ruthlessly dismissed on Monday by Los Blancos’ chief Florentino Perez and was replaced by Madrid legend, Zinedine Zidane. The move prompted speculation that Welsh star, Bale, was devastated by Benitez’s sacking after Benitez had made him an integral cog in his line-up.

Bale has been in sensational form this campaign, scoring nine goals and contributing to seven assists in thirteen La Liga appearances.

According to The Mirror, Manchester Utd executive vice-chairman Ed Woodward is yearning for the services of Bale. He would bring a new fresh impetus to Utd’s attacking play – adding pace and dynamism. He would embody the hallmarks of the club’s attacking philosophy.

New Madrid boss, Zidane was questioned about the future of Bale in his first press conference – however he quashed any suggestions that Bale did not have a future in his future plans.

Zidane said: “I can understand that he might feel aggrieved by Benitez’s departure but I will show him the same affection that he had from Rafa,

“He’s a vital player for the team.”

According to Sky Sports, the Frenchman said the Bale was “phenomenal” and that the Welshman was vital to the future of the club.

Bale missed Zidane’s first training session, with six thousand jubilant Madridistas in attendance. However he trained on Wednesday for the first time under Zidane, after a minor muscular injury and tweeted his happiness.

Great to train for the first time with the new mister and the team #HalaMadrid pic.twitter.com/n6nVNHEPYK