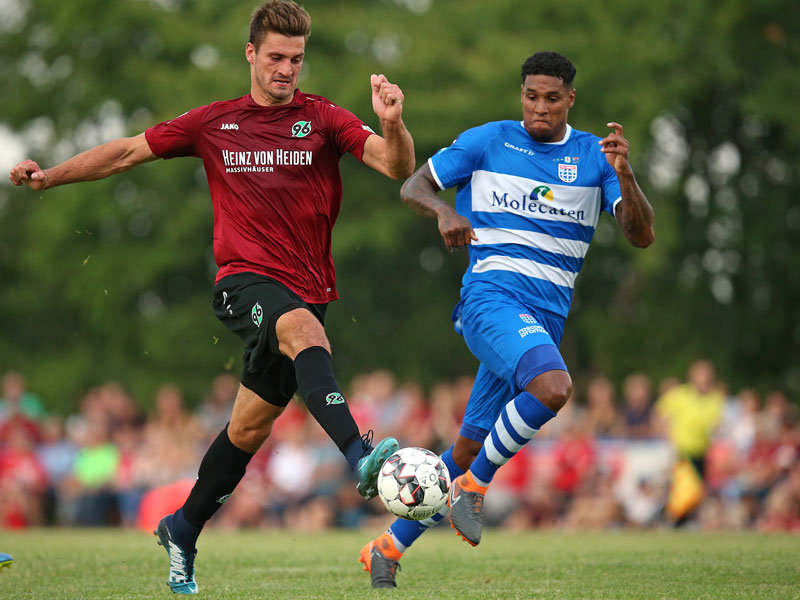 Chroniclers of the German game absolutely love a footballing fantasy which comes true and have found the perfect subject in Hannover Johnny-come-lately striker Hendrik Weydandt, the 23-year-old who has started his first season with the pros in devastating supersub mode.
First making a name for himself with a brace in Hannover’s DFB Cup win over Karlsruhe, then netting in a 1-1 draw at Bremen on the opening weekend of the new Bundesliga season, the strapping centre-forward certainly has proved the model of efficiency. Three goals in only 23 minutes on the pitch and on the score-sheet in the Bremen game just 75 seconds into his top-flight baptism.
Little wonder ‘Henne’ was unwilling to give his side of the story to the excited ranks of the media. Totally unaccustomed to the sporting spotlight, he has a brand new world of attention to get used to. He literally has emerged from the back of beyond. He is the nowhere man.
As recently as four years ago, he was playing in the ‘Kreisliga’ in his Lower Saxony backyard (the lowest of the eight-tier German soccer pyramid) and prior to joining Hannover this summer, was featuring up front in the fourth division for 1FC Germania Egestorf/Langreder.
Hannover’s initial idea was to exclusively use him in their reserve team. But it would not take long for those plans to be scotched, head coach Andre Breitenreiter sufficiently impressed by Weydandt’s form in pre-season, to promote him to the bench.
“He straight away stood up and rose to the challenge,” declared Breitenreiter. “He delivered top performances in every warm-up game. It was merely a question of seeing whether he could display his goalscoring qualities with us.
“Naturally his story is a fairy tale, but no one should forget that he’s worked very hard since coming here and deserves his success. He probably thinks himself that he should pinch himself to make sure he’s not dreaming. He’s very unassuming and humble. He wants to concentrate on his football and not be distracted. His goals are speaking for him.”
Currently Weydandt neither has an agent or a pro contract. Needless to say, Hannover director Horst Heldt already has the lawyers drawing up the necessary paperwork.
Article Continues Below
[collection name=”small” accordion=”mobile” excerpt=8]
What We Learned This Week
1. Get well soon.
Poor Kingsley Coman. After missing the business end of last season with damaged ligaments in his left-ankle – a setback which put paid to his hopes of making France’s World Cup squad – the young Bayern Munich has fallen victim to exactly the same injury. Sent flying on the stroke of half-time by a heavy challenge from Hoffenheim wing-back Nico Schulz, the 22-year-old now faces another prolonged spell on the sidelines. Bayern management were quick to point an accusing finger at Hoffenheim’s take no prisoners approach. ” In the first period especially, Hoffenheim went in brutally hard on some of our players, ” opined club chairman Karl-Heinz Rummenigge. ” It was Wild West football. “
2. Rudy can fail.
Unable to hold down a regular spot at Bayern, German international defensive midfielder Sebastian Rudy has agreed to a move to Schalke. Rudy is no lightweight, both tactically-aware and very strong in his link-up play. But simply found the competition for places too hot to handle at the Allianz-Arena, only able to clock up 16 Bundesliga starts for the Bavarians following a switch from Hoffenheim in the summer of 2017. Schalke are believed to have paid 20 million euros for Rudy. ” We’ve brought in an intelligent and technically-gifted player, ” declared Schalke coach Domenico Tedesco. ” His know-how will be particularly useful to us in Europe. “
Stay up to date with all the news and transfers by clicking on the highlighted links.
Don’t forget to follow World Soccer on Facebook and Twitter.