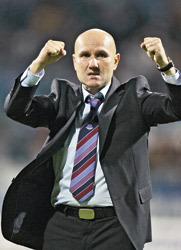 The new season kicks off in Ireland with reigning champions Bohemians starting as favourites to retain their title.

Despite their players reluctantly taking a significant wage cut during the close season, Bohemians start as favourites to retain their league title.

A proposed lucrative deal to sell Dalymount Park to a developer and move to a new stadium near Dublin Airport may now be on hold, but manager Pat Fenlon has still managed to keep the majority of last season’s double-winning squad.

Expect Derry City and St Patrick’s Athletic to be the clubs putting the most pressure on Bohs in the race for the title. St Pat’s have got off to a great start in each of the past two seasons before losing their lead and finishing second, to Drogheda and Bohemians respectively.

During the close season Pat’s sold midfielder Keith Fahey to Birmingham City and several other players left as the club abandoned their full-time policy.

But new manager Jeff Kenna, who won a Premiership medal with Blackburn Rovers, has brought in a few players from his former club Galway United and has ex-Canada international Paul Peschisolido as assistant manager at Inchicore.

Stephen Kenny returned to Derry City last season after a spell in Scotland with Dumfermline and managed to steady the ship at the Brandywell. Kenny is one of the best young managers in Ireland and, while he has a great cup record with Derry, this time around he should have plenty of time to concentrate on the championship.

Paul Doolin, who spent heavily when winning the League with Drogheda in 2007, is now in charge of Cork City. Unlike Dublin, where there are too many clubs, Cork don’t have any opposition locally and are always well supported.

After more than 20 nomadic years Shamrock Rovers have finally settled down in their new stadium in Tallaght. But while new manager Michael O’Neill is naturally ambitious, the Hoops don’t seem to have the talent at present to challenge for the title. Likewise Dundalk, who won promotion last season.

Paul Cook did a great job at Sligo Rovers last season, getting them into Europe and the All-Ireland Setanta Cup competition, and he is back in charge despite quitting during the close season.

Only one club will be automatically relegated this season. The sides finishing eight and ninth will meet to determine who has to play a relegation/promotion game against either the second division’s runner-up or third-place team.

Galway United, who just survived relegation last season, will probably be favourites for the drop this term. Other contenders could be Bray Wanderers and Drogheda United. Drogs have lost all their players from last season and new manager Alan Mathews must build a new team at a club where money is really tight.

Shelbourne, who are now just about getting back on track after their financial meltdown of two years ago, will probably start favourites to win the second tier.

By Sean Creedon in Dublin