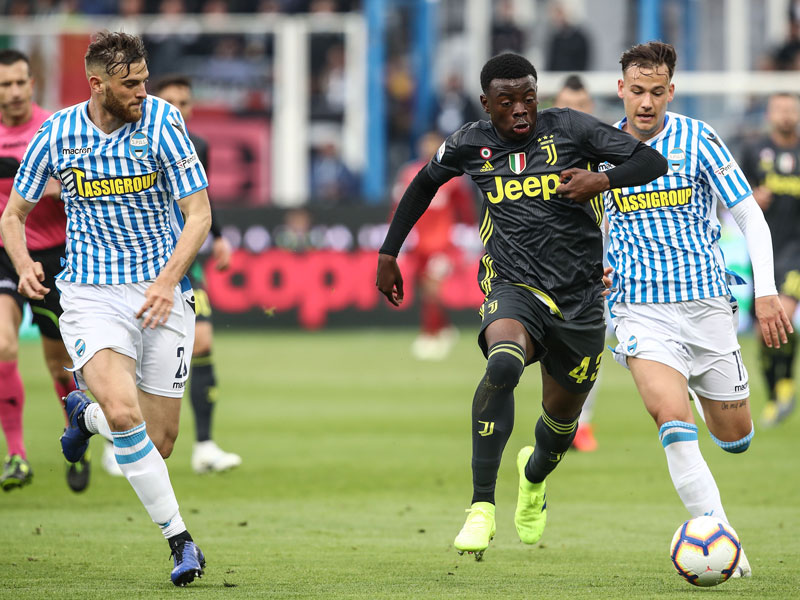 That eighth successive league title can wait, the Old Lady has more pressing matters on her mind. On paper, Juve’s 2-1 defeat by relegation battlers SPAL on Saturday (only their second Serie A defeat this season) might look like a major “surprise”. In reality it was merely a minor distraction on the eve of tomorrow night’s Champions League second leg quarter final tie at home to Ajax Amsterdam.

With a 20 point lead over second placed Napoli and with six games still to play, there was no urgency about wrapping up their eighth consecutive league title last Saturday. Hence, nine of the 11 players who started in that 1-1 first leg draw with Ajax in Amsterdam on Wedneday night were rested on Saturday. As coach Massimiliano Allegri said after the defeat by SPAL, “sooner or later, we’ll win the title”.

Frankly, as of now, winning the Champions League is much more important. Thus, even if Juventus came back from Amsterdam with a more than useful 1-1 result, Allegri is counting no unhatched chickens and taking no chances as he prepares for the return leg in Turin tomorrow night (Tuesday).

Szczesny, Rugani, Bonucci, Pjanic, Matuidi, Alex Sandro, Mandzukic, Bernardeschi and, of course, Ronaldo were all rested on Saturday, with most of them staying behind in Turin to nurse the knocks and bangs picked up in an intense battle with the brilliant young Dutch side.

In their absence, the mix of league debutants such as 17-year-old defender Paolo Gozzi and 21-year-old Cypriot midfielder Grigoris Kastanos alongside veteran reserves such as Colombian Juan Cuadrado and 2006 World Cup winner Andrea Barzagli did not quite prove up to the task.   Having taken the lead through the prodigious reserve Moise Kean, scoring his sixth league goal this season and his fifth in five straight games, Italy included, Juventus then failed to hold onto their lead being defeated by second half SPAL goals from striker Kevin Bonifazi and from 37-year-old veteran Sergio Floccari.

As he contemplates his formation for tomorrow night’s vital tie, coach Allegri will not be much worried by Saturday’s relatively meaningless defeat. Of much more concern will be the realisation that, against this talented, inventive and eager young Ajax, nothing has yet been decided.  In the immediate wake of that draw in Amsterdam, Allegri confessed:

“We could have done better, all right, but we still leave here with a very useful result thanks to our away goal…”

Allegri does not need reminding that in the last round Real Madrid left the ArenA with a 2-1 win which seemed certain to put them into the quarter finals. However, that 4-1 Ajax comeback win in Madrid sounds the alarm. This is not the time to sit back and play for the 0-0 result that would put Juventus in the semi-finals.

Thus, all being well, Allegri is likely to field the 4-3-3 line up which did so well in Amsterdam, with miracle man Ronaldo flanked by Federico Bernardeschi and by Croat Mario Mandzukic. Man of the moment, Kean,  could be brought off the bench in the second half to add some zip and pace up front, if necessary.

In a match of this importance, though, Allegri is almost certain to opt to start with the experienced, if slightly off form, Mandzukic. Still, Kean remains an intriguing card up the Allegri sleeve. In midfield, German Emre Can is likely get the nod over compatriot Sami Khedira in a line up in which will he will be flanked by Bosnian Miroslav Pjanic and French World Cup winner, Blaise Matuidi.

In defence, Szczesny returns in goal but veteran Giorgio Chiellini, who missed the first leg, remains doubtful for tomorrow night. This may prove to be only a relative loss to Juventus since Daniele Rugani proved himself an excellent replacement with a very solid showing last week.

Another player in doubt for the return clash is Brazilian Douglas Costa,  a second half substitute who came back into the team after a two month lay-off last week, coming close to scoring a dramatic winner after a brilliant solo run ended with his shot hitting the post. If Costa does not recover from his exertions last week, then Allegri may be tempted to play his Kean “card”, at least as far as second half substitions are concerned.

If matters go according to Juventus plan tomorrow night, then the Old Lady can get back to league title winning business by at least drawing with long time bitter rival Fiorentina, in Turin on Easter Saturday next, to thus pick up their 35th Serie A title. The bandwagon keeps on rolling.