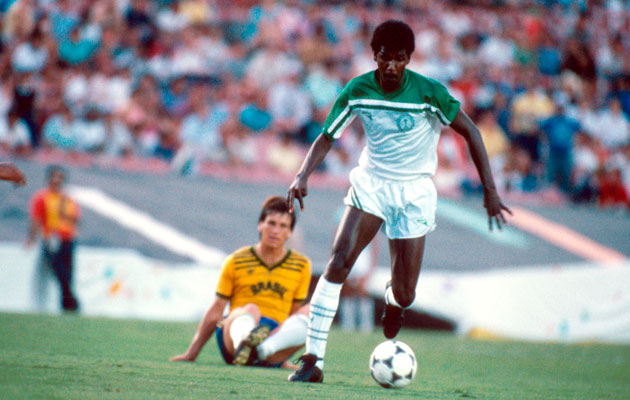 When a man of almost 56 years old opens a Twitter account for the first time, it’s fair to say one would not expect him to attract over 214,000 followers in as little as two hours, but that’s exactly what happened in September of 2014 to a Saudi man named Majed Abdullah. His handle @M_Abdullah_9 hints at a former life; one that brought him fame and perhaps fortune. To his legion of online devotees he is simply ‘The Arabian Jewel’.

He acknowledged those fans on Twitter saying that he “was happy to start exchanging with you through social media.” It was obvious, despite this newly-created online presence that Majed’s connection to the Saudi football supporting public had not diminished since his retirement in 1998.

Born November 1st, 1958 in the bustling Al Baghdadia district of the Red Sea port of Jeddah – Saudi Arabia’s second city – young Majed was immersed in football from infancy; his father, Ahmed Abdullah, was a well-respected local coach. In 1962, Ahmed relocated his family to the capital, Riyadh, after accepting the post as manager with one of the country’s newest clubs; Al Nassr FC. Little did the club president Prince Abdul Rahman (one of 115 children fathered by the desert nation’s second king, Saud) know, but that appointment would end up bestowing an even greater gift upon Al Nassr.

Majed quickly impressed in his new surroundings with junior team Al Ittifaq despite initially playing in goal; a team mate’s absence forcing not only a change in position, but also an alteration to the history of the Saudi Arabian game. Scoring goals – and lots of them – seemed to come naturally and his feats at that level attracted interest from Prince Abdul Rahman and Al Nassr’s boss Ljubiša Broćić; the latter dropped in unannounced at a training session one day on the strength of a tip-off by Mohammed Al-Hudayan – a fellow Al Ittifaq player – to try and persuade Majed to join the club his father once led. The Serb succeeded in his advances.

Fifteen months after his first encounter with Broćić, and aged just 17, Majed made his first team debut in January 1977 against Al-Shabab with his first senior goal coming a couple of months after that in a match with Mecca-based Al-Wehda. A brief spell waiting in the wings did nothing to supress him, however, and by the end of the season he had usurped Mohammed Saad Al-Abdali as first choice number 9 for Al Nassr – a position he maintained for the best part of the following two decades. Indeed, from 1977 to 1983 he helped himself to 116 goals in 96 club appearances in all competitions and the title of league’s top scorer four times. He also burst onto the international scene and quickly established himself as the Saudis’ chief marksman; particular highlights came against Qatar in 1979 (scoring five in a 7-0 Gulf Nations Cup win in Baghdad) and repeating the feat 20 months later in a friendly against Indonesia.

With mutliple league and cup medals in the bag at home with Al Nassr, 1983-84 – a season spent entirely with the national squad – stood out, even on Majed’s increasingly impressive list of achievements. Saudi Arabia made it through to the football tournament at the Los Angeles Olympics of that year – our protagonist being the top scorer during the qualification process, and although they suffered first round defeats to the might of West Germany (with two future World Cup winners, Andreas Brehme and Guido Buchwald), Morocco (whose team qualified for the World Cup two years later) and eventual runners-up Brazil whose side featured Dunga and Mauro Galvao, Majed was the only Saudi to score (a consolation in the contest with the Brazilians in the Rose Bowl, Pasadena).

Undeterred by what was an expected failure in L.A. the goals continued to flow apace during qualification for the Asian Cup Finals to be held in Singapore in December of 1984. Consecutive hat tricks came against Sri Lanka and Oman – 2 of 11 he managed for the national team and 28 in total throughout his career – during a golden month of internationals played in his birthplace of Jeddah where he notched 10 goals in just 6 games. The wiry, yet imposing striker – 6 feet 2 inches and more with his short-to-medium afro style hair – was 26 years old and reaching the zenith of his abilities. With deceptive acceleration, the strength to hold off and bounce off defenders, and with magnetic-like control of the ball, Majed resembled, but pre-dated the great Nigerian forward Nwankwo Kanu.

The Asian Cup finals began with a 1-1 draw against South Korea – Majed nicking a last minute equaliser for Saudi Arabia, and barring a penalty in the semi-final shoot out with Iran, he surprisingly drew a blank elsewhere. That is until the final.

The Chinese – barring a hiccup against the Iran in their opening fixture – cruised into the final with little difficulty. However, they were unable to handle Saudi Arabia; Majed’s stunning solo effort in the second half on a tacky, weather-worn pitch – imagine Roberto Baggio’s magical slaloming run and finish against the Czechs at Italia ’90 and you’re on the right lines – sealed a 2-0 success and brought them their maiden title. It topped off an incredible 12 months in the green and white for Majed who was also the runaway winner of the inaugural Asian Player of the Year award. He dominated the voting again in 1985 and 1986 to add more silverware (or gold) to the expanding collection won with Al Nassr.

It wasn’t just the Middle Eastern and Asian nations who saw at first-hand what Majed was capable of; 1988 in particular stood out as a year to remember. A full strength Scotland (2-2), world champions Argentina (2-2) – minus Maradona – Romario’s Brazil (1-4) and Bobby Robson’s England (1-1) all had their rearguards pierced by the Saudi star. All of this served as more than satisfactory preparation for the defence of the Asian Cup in Qatar. Majed led the Saudi line with typical aplomb, yet goals the deserted him until the semi-final; another match-up with Iran. This time 90 minutes was enough – Majed’s majestic far post header breaking Iranian spirits once more. The cup was retained in a shootout against the South Koreans and Majed made the Asian Cup nominee list again, finishing third.

By now he had hit the big three-oh and while he continued to terrorise opponents for Al Nassr and Saudi Arabia, the sun was beginning to set on a fabulous career. Injuries began to take their toll as the eighties gave way to the nineties, but there would be one last hurrah on the world scene – at the 1994 World Cup in the USA.

He warmed up for the competition – Saudi Arabia’s first appearance at the finals – with a goal in Pomona, California as Trinidad and Tobago were swept aside in an unofficial friendly (his 71st and last official international goal came in qualification against Kuwait).

First up was the Netherlands, one of the tournament’s outstanding sides with its plethora of Ajax-schooled talent; Rijkaard, Koeman, Bergkamp, the De Boers and the rest. The Saudis, captained by Majed, took an unlikely lead before the favourites rallied to take a narrow victory – Gaston Taument’s 86th minute winner sparing Dutch blushes in the RFK Stadium, Washington D.C.

Thirty-five-year-old Majed’s legs kept him on the sidelines for the encounter with Morocco; his comrades taking heart from their performance against Holland to record a 2-1 win and set up the unlikely scenario of advancing from their group having been written off as no-hopers from the very beginning. But the task at hand was a daunting one; defeating the unbeaten and quietly impressive Belgians in the searing midday heat at RFK.

Unfazed by the familiar weather conditions, the Saudis burst out of the traps. Said Al Owairan’s mazy dribble and finish wrote his name into World Cup folklore and elevated himself to golden boy status with his compatriots on the exact day that the legend of Majed Abdullah bowed out at half time. The baton, to some extent, had been passed on the occasion of Saudi football’s greatest day. The Arabian Jewel was then an unused substitute as the fairytale was extinguished in Dallas by Sweden in round two.

It would still be another four years until he finally hung up his boots at the age of 40 with some pretty impressive statistics to back up his legendary status; 260 goals in 240 games for Al Nassr, 71 goals in 116 games for the Saudi national side, four Saudi league titles, four Saudi King’s Cup victories, two Asian Cups and three times winner of the Asian Player of the Year award.

As the manager of his beloved Al Nassr, he guided them to the Asian Super Cup in 1998 – entitling them to a spot at the FIFA World Club Cup in Brazil in 2000; the much-maligned competition that Manchester United chose to forsake participation in the FA Cup for. They failed to make a mark, but their first opposition in Sao Paulo were Real Madrid; the Spanish giants were chosen to be the guests at Majed’s farewell game in 2008 as Al Nassr honoured the life and career of their great hero.

A capacity crowd of 70,000 squeezed into Riyadh’s King Fahd Stadium to see Real’s stars succumb to the buoyant Saudi men. Arjen Robben opened the scoring for Madrid before four unanswered strikes sealed a memorable (if perhaps scripted) win to ice the cake on an evening devoted to Saudi’s most celebrated and most decorated player.

While Majed Abdullah may not be a household name around the world like other great strikers of the 1980’s, but mention his name to any Saudi, and watch their faces light up and their voices become fevered with excitement.

And even now, 360,000 followers are now hanging on his every online word.