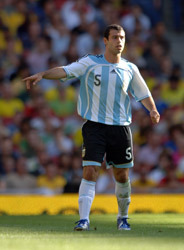 Manchester United have revealed that they turned down the chance to sign Argentine midfielder Javier Mascherano on two occasions during the summer.

“We were also offered Mascherano but we didn’t want to go for him.

“We were offered Mascherano for a significant sum at the start of the summer and also last week on a loan deal.

“We had watched him last season but the manager and his staff didn’t want to pursue him.

“While he is clearly a very good player it was decided he wasn’t required at the club.”

Meanwhile, Gill remains confident of agreeing a new deal with striker Wayne Rooney. Representatives of the England international have already held preliminary negotiations with United about a wage increase. Rooney is reported to be seeking financial parity with Rio Ferdinand, who earns £110,000 a week.

“His eagerness to sign a long-term deal is great,” said Gill.

“I think there will be developments over the next few months.

“We want to tie him down to the club.”