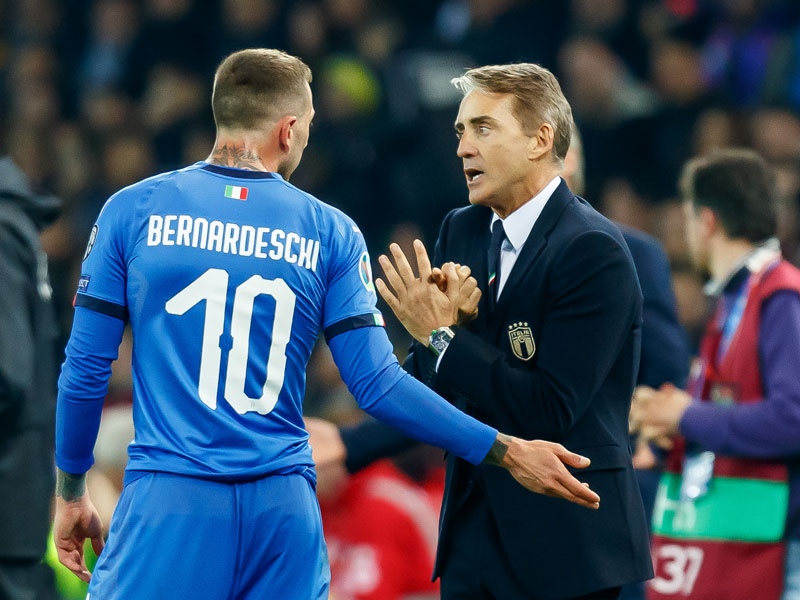 As Italy prepare for a hardly intimidating Euro 2020 qualifier against little Lichtenstein in Parma tonight (Tuesday), there is little doubt but that the Italian qualifying campaign has already got off to an excellent start with that 2-0 defeat of Finland in Udinese on Saturday night.

For those of us, like your correspondent, who would argue that Italian coach Roberto Mancini is the right man in the right place at the right time, there was a strong “feel-good” sensation about Italy’s opening game win. Mancini’s new-look, “young” Italy (average age 26 years and two months notwithstanding the presence of 34 year old Chiellini and 31 year old Bonucci) is far from the finished article but there was much to like about the quality of its football in this first “real” test.

In normal times, no one would be getting unduly excited about an Italian win against Finland. It is simply what you expect, to be executed without fuss or faltering. Yet, of course, these are not normal times for an Italian football movement desperately keen to leave far behind the disappointment of that humiliating failure to qualify for the Russian World Cup last summer.

Saturday night’s performance will serve that purpose more than adequately. Not only did Italy dominate against an understandably dour and defensive Finland but, as always with a Mancini side, it played some good football in the process.

Whilst it is true that the attacking bent of Mancini’s side occasionally left Italy open to dangerous counter attacks (Finland’s Norwich striker Teemu Pukki might well have scored an equaliser to make it 1-1 early in the second half), there was much to like about the way Italy consistently played in the Finnish half.

On top of that, icing on the cake, the game also shone the spotlight on 19-year-old Juventus reserve striker, Moise Keane, a player who could yet be destined for a long and profitable international career. Playing in only his second game for Italy, Kean wrapped up the result by scoring the decisive 76th minute second goal.

This has been a fabulous March for Kean, a reserve player of Italo-Ivory Coast roots who has made only four Serie A appearances this season for Juventus. When club coach Massimiliano Allegri opted to rest the various Ronaldos, Dybalas and Mandzukics for a home tie with Udinese right on the eve of that titanic Champions League 3-0 win against Atletico Madrid, he gave a run-out to Kean who rewarded him with two goals.

Four nights later, Kean came on for the last ten dramatic minutes of that 3-0 win against Atletico, making himself more than useful, even coming close to scoring. Last Saturday night, playing sometimes on the left wing and sometimes as a central striker, he was consistently Italy’s most dangerous player, crowning his night with a brilliantly taken goal which made the most of his tremendous pace, following a clever lay-off from Lazio’s Ciro Immobile.

Kean has clearly done well to opt, at least for now, for relative obscurity at the court of King Cristiano, learning his craft and a whole bag of tricks at the hands not only of Ronaldo but also from guys like coach Allegri and defenders Leonardo Bonucci and Giorgio Chiellini. All eyes at Parma tonight will clearly be focussed on him as Italy ideally go in search of an emphatic win that would leave their goal difference in a very good place.

Kean’s performance was all the more gratifying given that Mancini had called him into the team following the injury-enforced exclusion of both Fiorentina’s Federico Chiesa and Napoli’s Lorenzo Insigne, two established first choice attacking players in the Mancini hierarchy. The Italian coach, who himself played his first Serie A game for Bologna as a 16-year-old, once again showed his willingness to trust to youth, picking a player whose only previous appearance for the senior team had been a final half four as a substitute in a 1-0 friendly win against the USA last November.

Mancini had already made the point last August when he called AS Roma’s uncapped 19-year-old Nicolo Zaniolo into his squad. At the time, most Italian fans knew little or nothing about Zaniolo, a player who had yet to make his Serie A debut.

Zaniolo had attracted Mancini’s attention with impressive peformances in the Italy U19 team which lost last summer’s UEFA U19 Championship final in Finland, beaten 4-3 by Portugal. The rest, of course, is history with Zaniolo proving himself the absolute revelation of this season’s Serie A campaign.

Another original choice by Mancini for Saturday’s game had been that of his right back, Valencia player, Cristiano Piccini, a former Fiorentina youth player who has played all his football for the last five years in Spain and Portugal with Betis, Sporting Lisbon and Valencia. In the process, of course, Piccini had almost completely disappeared off the Italian radar. Until Mancini put him back in the picture, that is…

Piccini is ruled out of tonight’s game by injury but Kean is expected to feature up front, probably alongside his club team mate Federico Bernardeschi and Sampdoria’s evergreen Fabio Quagliarella, called into the squad because of the injury crisis. Ironically, Kean would have been a seven year old when Quagliarella, currently Serie A’s leading goalscorer, made his international debut in a March 2007 Euro-qualifier against Scotland.

Still, the pair represent one obvious attribute of the Mancini Italy, namely the blend of youth and experience. Could be a winning combination.