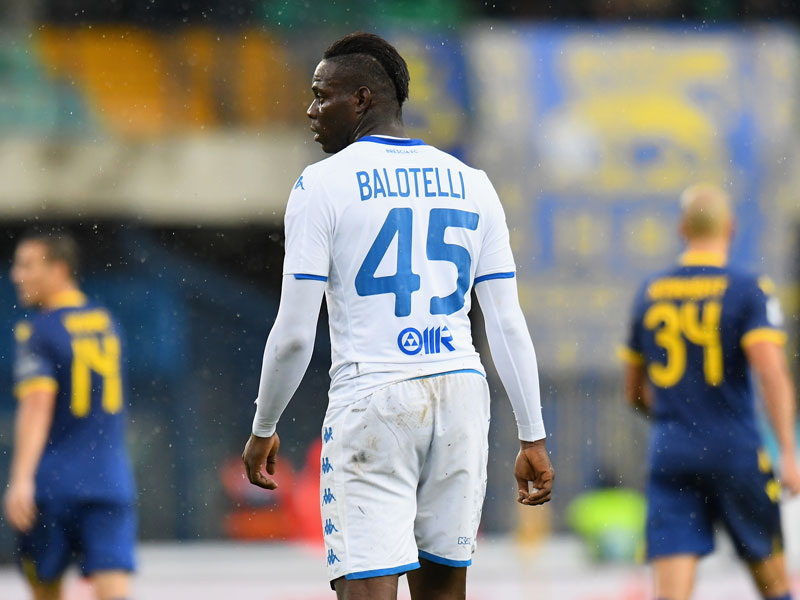 Did Mario Balotelli just kick the ball (and all that goes with it) right out of play? On Sunday, 29-year-old Balotelli, no stranger to headline grabbing moments, put himself back on the front pages when he stopped playing during Brescia’s Serie A game away to Verona.

It was nine minutes into the second half when Balotelli received the ball close to the Verona corner flag. Mobile video footage, posted on various social media, records Verona fans shouting offensive, monkey chants at Balotelli as he gets on the ball. All of a sudden, Balotelli stops in his tracks, picks up the ball and furiously kicks it high into the terraces behind the Verona goal from where the racist chanting had come.

There then followed a confusing few minutes when not only did Balotelli threaten to walk off the pitch but when match referee Maurizio Mariani also suspended the game.    A message read out on the public address system then threatened a total supension if the racist chanting did not stop. After just over four minutes, however, the match resumed and Verona went on to record a 2-1 win, with that last mentioned (and irrelevant) Brescia goal coming from a late, splendid Balotelli shot from outside the box.

The problem about this latest “racist” incident in Italian football is that it concerns not so much the irascible Balotelli (hardly new to contoversy) but rather also the Verona club and supporters, some of whom seemed keen to play down the whole event. Verona’s Croatian coach Ivan Juric denied that there had been any racial abuse shouted at Balotelli at all, claiming rather that there had been “whistling and teasing against a great player…but nothing else”.

Verona club President Maurizio Setti told Italian TV that he had heard no racist chanting, claiming that his fans are “ironic, not racist”. Yet, monkey chants can clearly be heard being shouted, perhaps by only a handful of fans, on the footage posted on social media.

“Balotelli is at the end of his career, so he decided yesterday (Sunday)…to pull that number and to kick the ball into the terraces…Next year, he won’t be playing football anymore rather he will be acting the prima donna on TV…”

When it was pointed out to Castellini that racist chants had been recorded, the fan leader admitted that there “might have been somebody, maybe seven or ten people” who shouted racial abuse, adding however:

“We Verona fans have a particular culture of a certain type of desecrating identification, we jeer players, they might be bald, or they might have long hair, they might be from the south (of Italy) or they might be black, but this is not done from racist or political instincts. This is just folklore, it all ends there…”

Castellini then registered himself as a candidate for the most politically incorrect statement of the year, when he further commented:

The point here, of course, is that, as many fans know, Balotelli was born to a Ghanian couple, Thomas and Rose Barwuah, in Palermo, Sicily but was subsequently entrusted to the Balotelli family of Concessio, near Brescia, after his parents had abandoned him as a two year old to the care of a hospital.

Born and brought up his entire life in Italy, but still not completely Italian? That observation says much about the recurring rise of a certain type of far right, racist ideology that has dogged Balotelli’s entire Italian football experience.

It will be interesting to see now just what disciplinary measures will be imposed on Verona (if any at all?) in the wake of Sunday’s match. The widespread show of solidarity to Balotelli, expressed by such as former England coach Fabio Capello, Napoli’s Senegalese defender Kalidou Koulibaly, Everton’s Moise Kean and many others will make it hard for the Football Federation to let this one slip by unpunished.

All the more so, given that the long and disturbing history of racist incidents in Italian football has continued apace this season as witness the “welcome” afforded to Inter’s Belgian striker, Romelu Lukaku, when playing away to Cagliari in only his second game for the club. Subjected to racist abuse as he stepped up to take what turned out to be a match winning penalty in a 2-1 victory, Lukaku made no secret of his profound dismay, writing on Instagram:

Lukaku went on to speak of the “shame” of racial discrimination… but, the fact remains that the Federation’s own sports judge ruled that Cagliari had no case to answer in relation to the monkey chants directed at Lukaku. The investigation into the incident concluded that, although “cries from individual spectators” were heard as Lukaku prepared to take his penalty, they were not perceived either by the Federation’s own inspectors or by the stadium security as (racially) discriminatory.

Will the sports judge decide that the shouting at Balotelli was equally unclear or will he impose some form of sanction?   Has Mario Balotelli just kicked Italian football into a whole new ballgame?