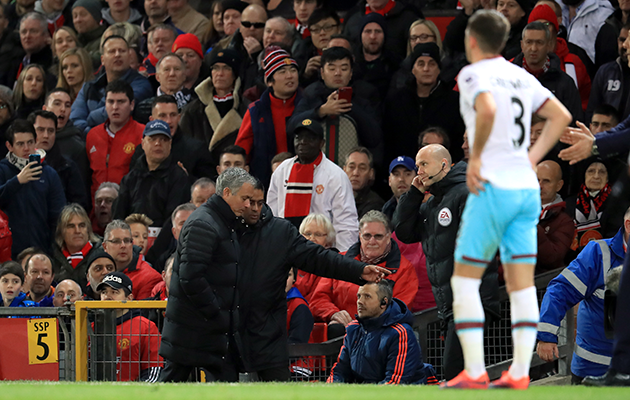 The Football Association has argued that Manchester United manager Jose Mourinho was issued with a one-match touchline ban last month for kicking a water bottle, because he could have “endangered people around him”.

Mourinho was sent to the stands during United’s 1-1 draw with West Ham on November 27 following his reaction to a Paul Pogba yellow card, which included him kicking a bottle.

The United manager was subsequently banned from the touchline by the FA for his side’s 4-1 EFL Cup win over the Hammers three days later, while also receiving a £16,000 fine for his actions.

The FA’s disciplinary panel explained its decision to sanction the Portuguese as “the fact remains that he aggressively kicked the bottle in a manner that could have endangered people around him regardless of the motivation to do so.”

“The commission makes no comment as to what actually motivated Mr Mourinho to kick the bottle in the way that he did,” the commission added.

The panel also confirmed that Mourinho is “striving to improve his disciplinary record” and that he issued a “sincere apology for his actions” afterwards.

“Mr Mourinho ought to be credited for his admission to the charge, his non-confrontational actions when engaging with the officials subsequent to him kicking the bottle and his apology, which the commission accepted as being sincere,” the commission added.

Mourinho served a one-game touchline ban during a 3-1 Premier League victory at Swansea City last month after admitting he used “abusive and/or insulting words to an official” before referee Mark Clattenburg sent him to the stands during the Old Trafford draw against Burnley in October.

The Portuguese was also fined £50,000 and warned about his future conduct earlier this season for media comments made about referee Anthony Taylor.