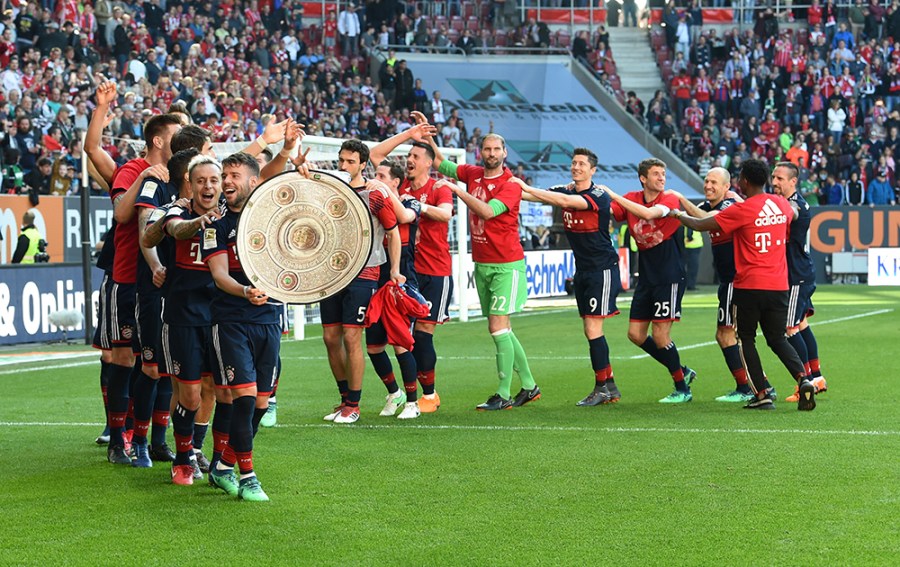 It’s going to need the footballing equivalent of hell freezing over to put an end to Bayern Munich‘s total domination of the Bundesliga.

The all-conquering Bavarians wrapped up their sixth consecutive German title with a 4-1 win at Augsburg and given FCB’s vastly superior player pool and financial resources, the chasm which separates them and the rest of the league is most unlikely to be closed any time soon.

Too confident, masterful and slick to be denied, Bayern effectively had the championship won months ago. At the winter break, they were already nine points clear at the top of the table and were only going to stretch it further in the New Year; they now enjoy a 20-unit advantage over second-placed Schalke.

That said, Bayern were not always in cruise control this season. Early in the campaign, with Carlo Ancelotti in charge, the men in red-and-white stripes were not at all in rude health, stale and predictable in their approach play, dysfunctional defensively and with many of their squad openly rebelling against the coach.

When push came to shove, Ancelotti just had to be paid off. Not only had his side lost faith in him. Results were terrible too: a humiliating 3-0 drubbing by Paris Saint-Germain in the Champions League and their worst start to a Bundesliga campaign in seven years (13 points from their first six games)

What was required at this point was a sustained programme of back to Bayern basics and since taking over from “Carletto” in October, interim boss Jupp Heynckes certainly has provided it. The Heynckes A-Z? Greater emphasis on back-line organisation and physical conditioning, an obsessive attention to detail, more open lines of communication with the players and his infectious hunger for victories. At the drop of a hat, he has turned Bayern into a team again.

Talk about the Heynckes effect. The day he arrived last autumn, Bayern were five points behind then league leaders Dortmund. Within three weeks, the tables were turned and now FCB have 21points more than the Schwarz-Gelben.

Heynckes, now 72 years of age and in his fourth spell at the Bayern controls, might be in elder statesman territory. Yet very much remains the ultimate competitive animal. In his playing days as a striker for Borussia Monchengladbach he would react to a defeat by uttering sulk for days. He found it impossible to live with losses then. And still does today.

What We Learned This Week
1. Sixth time a charm.
Without a win in his first five games as Wolfsburg coach, Bruno Labbadia finally has that match-winning buzz,  his relegation-threatened side prevailing 2-0 at Freiburg. High time the Wolves performed with bite. Apart from victory in the Black Forest, the VW club have won only one other Bundesliga game this year (1-0 at Hannover in late January).

2. A Greek gift.
Dortmund’s Greek international centre-back Sokratis may soon depart the Westfalenstadion. The 29-year-old Milan, Genoa and Werder Bremen hard-man is being pursued by both Manchester United, Arsenal and Juventus and is rated in the 30 million euro bracket. Dortmund already boast two excellent young central defenders in the Swiss Manuel Akanji and France’s Dan-Axel Zagadou.