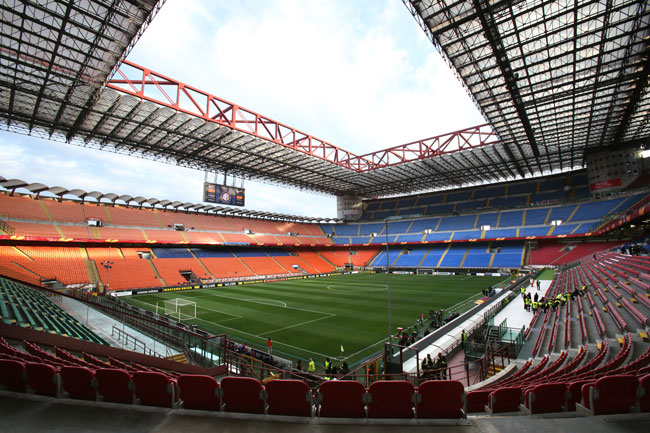 If the Chinese and Indonesian owners of Milan city cousins, Milan and Internazionale, ever had any doubts about the difficulties facing them in Serie A, results last weekend probably confirmed their worst suspicions.  After a weekend when both teams lost – Milan going down 2-1 at home to Empoli and Inter losing 5-4 away to Fiorentina – the two currently lie in sixth and seventh positons respectively, just outside the Europa League qualifying zone.
It would seem that, in the wake of an intense Derby on Easter Saturday in which Milan pulled off a last gasp, 97th minute equaliser for a 2-2 draw, neither side could quite get themselves back on the right track. In a sense, the derby draw was a disappointment for both teams even if one might have expected Milan to come out of it the stronger, given that they salvaged a point with the last kick of the match.
However, both sides have had some disappointing recent form. In their last six games, Inter have had to abandon any notion of battling for a Champions League, top three spot as they have lost to Crotone, Sampdoria and now Fiorentina. Ironically, too, a six-match run which has seen them pick up just five points had begun early last month with a  spectacular 7-1 win against surprise packet of the season, Atalanta, currently seven points in front of them in fifth place.
Milan’s recent form has been better, but they were coming from further back.  If Inter have won one, drawn two and lost three, Milan have won two, drawn two and lost two (to Fiorentina and Juventus). The ironic aspect to all this is that, by mid-March, both sides had seemed well launched down the road to a recovery and seemingly to Europa League qualification.
With five games still to play, it is too early to say whether both have definitively comprised their Europa League chances but from here on in, they can obviously not afford to drop more points. Problem here is that both face some awkward customers on their run down to the finish. Milan face second placed Roma at home and then rampant Atalanta away, both potentially complicated games. Likewise, Inter are at home to third placed Napoli next Sunday night while they are away to Europa League rivals Lazio on the second last day of the season.
In the meantime, both sides are struggling to plan for the immediate future in a fluid and changing situation. For example, on the March 12th weekend of Inter’s 7-1 defeat of Atalanta, coach Stefano Pioli’s stock appeared to rate high. Brought in as a classic “safe pair of hands” who would steady the ship in the wake of the essentially  disasterous 84-day reign of Dutch coach, Frank De Boer (he lost seven of his first 14  games), Pioli was shaping up well. On that day, his Inter were in fourth place in Serie A, just six points behind Napoli, prompting commentators to suggest that if Pioli’s team sustained this form, then the coach would clearly become a candidate to remain at Inter next season, rather than serve as merely a stop-gap appointment to take the side through to the end of the season.
After last Saturday’s bitterly disappointing 5-4 defeat by Fiorentina, in a game in which Inter were probably flattered by the final scoreline, news reports suggested that Pioli had offered to resign. At this stage, Inter may well be considering a number of new names for next season with such as Antonio Conte (Chelsea), Diego Simeone (Atletico Madrid) and Luciano Spalletti (Roma) being mentioned in dispatches.
On the Milan front, there appears to be less confusion with commentators suggesting that the new ownership of Chinese entrepreneur, Li Yonghong, looks favourably on a relatively young Milan squad (featuring players such as 18-year-old goalkeeper Donnarumma, 22-year-old defender Romagnoli and 24 year-old Spanish midfielder Suso). Furthermore, this Milan is coached by one of the most promising younger coaches in Italian football today, namely 42-year-old Vincenzo Montella.
Milan, however, face immediate planning problems with regard to goalkeeper Donnarumma. Not only is Donnarumma widely regarded as an outstanding talent with a glittering future in front of him but the new ownership also sees him as a key element in their future reconstruction/promotional plans. In that sense, the news that Donnarumma’s powerful agent Mino Raiola is shortly due to discuss his client’s future with the club might just set a few pulses racing.
As we head down to the end of season wire, there is clearly plenty still to play for at Milan’s two prestigious clubs. In the context of the ambitious plans of both, failure to land a Europa League qualification could represent a serious setback.