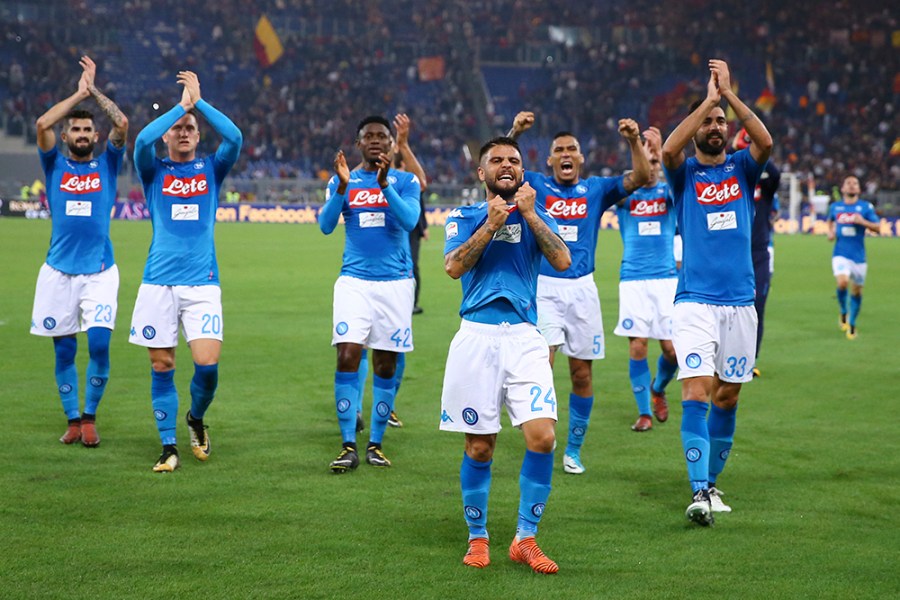 When Napoli owner Aurelio De Laurentis suggested, on the eve of his club’s Champions League tie away to Manchester City tonight (Tuesday), that coach Maurizio Sarri should rest some of his first team players, was he just playing mischievous mind games?
In an interview in Monday’s La Gazzetta dello Sport, De Laurentis pointed out that Serie A league leaders Napoli have a top of the table clash with second placed Inter Milan at the San Paolo next Saturday night, adding laconically: “The Inter game is coming up and that’s just as important [as the Champions League tie with Man City]”.
De Laurentis was perhaps attempting to take the heat off his own players by suggesting that this was just one other “important” game. There is a logic to his reasoning, however. In essence, he appears to be arguing that you can lose a Champions League qualifier and still get through to the second round.
In contrast, points dropped against your closest Serie A rivals might prove costly next May. Furthermore, De Laurentis understands just as well as anyone else that, like his own team, the new-look, Luciano Spalletti coached Inter are on something of a roll and come into Saturday’s game on the back of a last gasp, 3-2 Milan derby win on Sunday night.
Whatever way you look at it, this will be an intriguing week for Napoli. Right from the start of the season, many commentators had suggested that Napoli, third-placed finishers last season, might this year be strong enough to take the title for the first time since 1990 when the club, of course, was greatly inspired by the unforgettable genius of Argentinian Diego Armando Maradona.
Thus far, those predictions have been looking good as Napoli have made an explosive start to the season winning all eight opening games. Their most recent win, a 1-0 defeat of Roma at the Olimpico in Rome on Saturday night, told us nothing new about them. Namely, they can be mesmerising up front, with Slovak Marek Hamsik pulling the strings for the front trio of Lorenzo Insigne, Belgian Dries Mertens and Spaniard Jose Callejon.
At the same time, though, they almost paid dearly on Saturday night for failing to wrap up their long time dominance with a second goal. In the second half, only the woodwork (twice) and an excellent save from talisman Pepe Reina saved them the embarrassment of throwing away a deserved win.
As Napoli head off to the Etihad Stadium tonight, you could be tempted to classify them as a very untypical Italian side, in that they are good going forward but distinctly vulnerable in defence. This is only partially true. World Soccer would argue that, thus far, Napoli’s biggest shortcomings at home and especially abroad have been much more mental than technical or tactical.
Take the club’s second round tie against eventual tournament winners Real Madrid last February. In the first leg at the Bernabeu, Napoli were unable to capitalise on a dream start which saw Insigne score an eighth minute, long range opening goal that caught Real’s Costa Rican goalkeeper, Kaylor Navas, out of position.
That could have been the preamble to a night of heroics in the intimidating surrounds of the Bernabeu. However, within ten minutes, Real had equalised through Frenchman Karim Benzema. Faced with a powerful Real reaction, Napoli had never looked for a second as if they really believed that they could or would hold onto to their lead. In the end, they were comprehensively eliminated 6-2 on aggregate by Real.
Napoli’s away tie with the Premier League leaders this week and indeed Saturday night’s home tie against Inter will offer a tantalising chance to see just what, if any, progress the team has made on the psychological front. Is Napoli about to make the sort of quality leap forward which would allow them to impose themselves in both games?
It is obviously very early in the season to be coming to any meaningful conclusions. However, despite what Aurelio De Laurentis seems to imply, Tuesday’s tie against Man City clearly matters. Having already lost their opening group game away to Ukrainian side Shaktar Donetsk, Napoli could find themselves in a very compromised position if they were to lose again.
Nor does it sound as if Napoli coach Sarri will be paying too much attention to his boss’ comments. If reports from Naples are accurate, then Sarri will field a full strength side against City with the only change from the side which beat Roma being the inclusion of  dynamic Pole Piotr Zielinski instead of Brazilian Allan.
If Napoli face a tall order in Manchester, then their defeated opponents on Saturday night, Roma, face an equally difficult Champions League tie away to Chelsea. Roma might take some small comfort from the fact that Antonio Conte’s Chelsea appear to have plenty of their own problems as evidenced by successive Premier League losses to Man City and to Crystal Palace.
Which leaves us with the Old Lady herself, Italy’s No. 1 Champions League contender Juventus. Now third in the league, following Saturday’s dramatic (but deserved) 2-1 home loss to Lazio, Juventus will want to get their show on the road at home to Sporting Lisbon.
Another slip-up here and we might just contemplate some heretical thought. Has the side which has won the last six titles, not to mention played (and lost) in two of the last three Champions League finals, lost its hunger? Or is this just another Juventus false seasonal start which, sooner or later, will resolve itself leading to a resumption of normally all triumphant ways?
All in all, from the Italian viewpoint, this week’s Champions League ties could be very revealing.