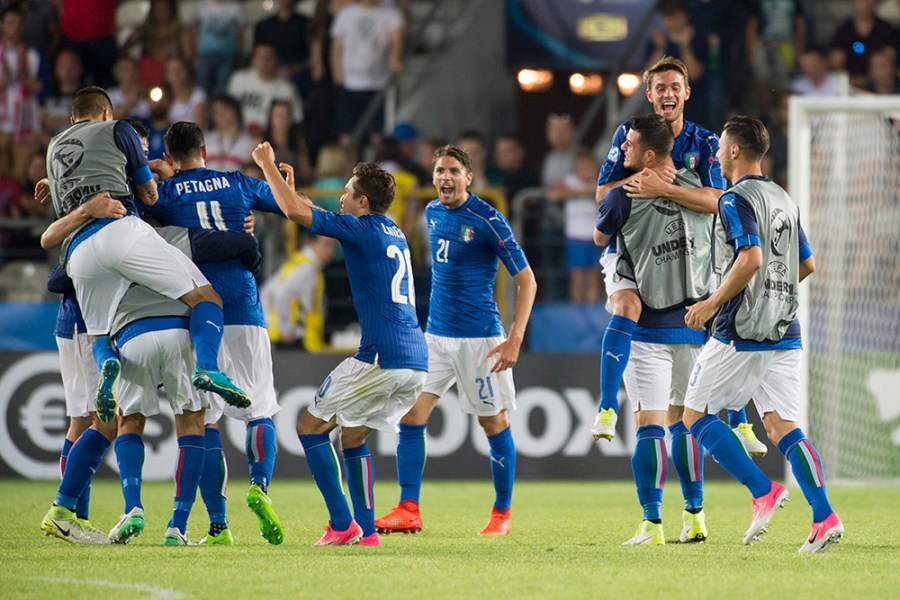 There was a time when you would take it for granted that Italy would make it to the Euro Under-21 final.  In 12 years between 1992 and 2004, Italy won the title no less than five times.  Under Cesare (father) Maldini’s coaching, they won three straight titles  between 1992 and 1996.
Times have changed, however.  Not since a young Daniele De Rossi and striker Alberto Gilardino inspired a title win in Germany in 2004, not since then has Italy lifted the trophy. Starting as of tonight in Krakow, Poland, the current Under-21 side, coached by former Roma and Inter midfielder Gigi Di Biagio, get a chance to end the 13-year long drought when they line out in the Under-21 semi-final against “bogey man” Spain.
In a football world where Italian domestic football clearly ranks some way down the food chain, overwhelmed by the economic might of the English Premiershp and the Spanish Liga, this Under-21 team in many ways represents Italy’s best hopes for the future. Eight of the squad which did so well in a 1-0 win over Germany on Saturday night to secure tonight’s semi-final slot have already played for Gian Piero Ventura’s senior World Cup side. Here we are talking about Bernardeschi (Fiorentina), Conti (Atalanta), Caldara (Atalanta), Donnarumma (Milan), Gagliardini (Inter), Pellegrini (Sassuolo), Petagna (Atalanta) and Rugani (Juventus).
Speaking just weeks after Real Madrid very firmly put Juventus in their box in the Champions League Final in Cardiff, it is no exageration to suggest that the above players are out on a “national recovery” mission in Poland tonight as they attempt to play Italy into a Friday final which would see them face either England or Germany. Against a Spanish team which features some very experienced players in the shape of  Champions League winner Asensio (Real Madrid), Saul (Atletico Madrid), Deulofeu (Milan), Sandro (Malaga), Ceballos (Betis), Bellerin (Arsenal) et al, the Italians face a tall order.
Not only did the Spaniards arrive at these finals looking like many people’s idea of the eventual winners but they have also confirmed that impression with their impeccable first-round form when they were the only team to win all three Group games, defeating Macedonia, Portugal and Serbia for a goal difference of 9 scored and one conceded.
Just at the moment, too,  a Spain v Italy clash tends to touch on a raw Italian nerve. It is not just that there are plenty of recent negative precedents such as Juve’s two Champions League defeats by Barcelona in 2015 and by Real this year, not to mention Italy’s Euro 2012 final loss in Kiev to Spain. In a sense, much more worrying for the Italian football movement is next September’s all vital World Cup qualifier in Madrid when many believe that Spain will condemn Italy to the play-offs in a game where even a draw for the home side will almost certainly be enough to see them through to the Russia finals.
For all these reasons, Di Biagio’s team could provide an important filip for Italy, were they to buck the recent, mainly negative trend. Given the quality of the balanced, tough and focussed football played by the Italians in their 1-0 win over Germany in Krakow on Saturday night, Italy will clearly be no pushover. In a sense, the sort of typical Italian defensive solidity and organisation which saw Antonio Conte’s Italy knock Spain out of last summer’s senior European Championships in France, could well be replicated by Di Biagio’s team this evening.
Italy will be without two very useful players in Andrea Conti (perhaps bound for Milan this summer) and Sassuolo’s  Domenico Berardi (heading to Juventus?), both suspended. Furthermore, the Spaniards have had an extra day to prepare for this semi-final while they were able to give many of their first choice players a rest and leave them out of the side which won their third first round game, 1-0 against Serbia.
All the odds would suggest that Spain will again put one across on their great rivals and mediterranean neighbours, above all, because this is the most talented team that the Italian Under-21 side has encountered in the last four years. All the odds, however, would also suggest that the Italians will not sell their hides cheaply.
TEAMS:
ITALY: (4-3-3) – Donnarumma; Ferrari, Caldara, Rugani, Barreca; Benassi, Gagliardini, Pellegrini; Bernardeschi, Petagna, Chiesa
SPAIN:  (4-3-3) – Kepa; Bellerin, Mere, Vallejo, Gaya; Saul, Llorente, Ceballos; Deulofeu, Sandro, Asensio