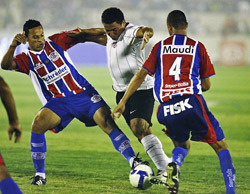 Sunderland v Spurs Tottenham make the trip to Sunderland this Saturday in the only Premier League match this weekend – 15:00.

Former World Player of the Year Ronaldo made his long-awaited return from injury on Wednesday, but his appearance was overshadowed by a post-match media scrum which left the player nursing a black eye.

The 32-year-old, who has spent 13 months out of the game with a knee injury, came on in the second half of Corinthians’ 2-0 win at Itumbiara in a Copa Brasil game.

Ronaldo appeared to have a badly bruised and swollen right eye – believed to have been caused by a reporter shoving a microphone into his face – when he finally escaped the playing area.

Ronaldo saw little of the ball after coming on in the 67th minute, but his brief appearance impressed Corinthians coach Mano Menezes.

“He had a good debut, moved well and tried a few dribbles,” Menezes told reporters.

Ronaldo ruptured a tendon in his left knee in a Serie A game playing for Milan against Livorno and then left the Italian club at the end of his contract last summer. He joined Corinthians in December in a move and has taken nearly three months to reach match fitness.

Sunderland v Spurs Tottenham make the trip to Sunderland this Saturday in the only Premier League match this weekend – 15:00.